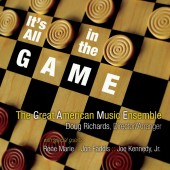 REVIEW: The Great American Music Ensemble, 'It's All in the GAME,' Jazzed Media >>

Doug Richards is one of the most respected composers/arrangers you've never heard of, so much so that a 2014 tribute CD, 'Bugles Over Zagreb: The Music of Doug Richards' by Rex Richardson, paid tribute to him before he ever even recorded under his own name. Richards put The Great American Music Ensemble (GAME) together in the mid-'80s, toured throughout the '90s, and in 2001, recorded 'It's All In The Game,' yet due to lack of label interest, it sat unheard until now.