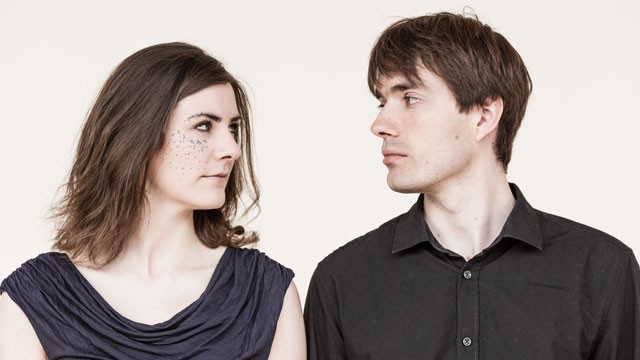 "So I think that generally, a more openness in the US towards new concepts in new music, as opposed to Europe, where I think there’s still a certain kind of academia..." -- Christopher Tarnow (Photo : Butterscotch Records )

German theremin virtuoso Carolina Eyck and pianist/composer Christopher Tarnow set their American debut today by way of  Improvisations for Theremin and Piano on Buttersctoch Records. Produced by Allen Farmelo, Improvisations, modernizes the theremin and piano in a sonically jangled delight for all five senses.

Eyck studied under Lydia Kavina, a student herself of theremin God Léon Theremin's protégé, Clara Rockmore. Having grown equally tired and frustrated with the limitations of her classical training, Eyck took to a more contemporary technique. At 17, she published her own method book: The Art of Playing the Theremin. Now, having found solace in collaborative work with Tarnow, Eyck is the European-cum-American secret to modernized theremin works.

Classicalite recently caught up with the duo to gain a stronger understanding of the instrument that plays without touch, as well as the collaborative process behind Improvisations.

Classicalite: Improvisations for Theremin And Piano on Butterscotch is your first go at it in the American music scene. What differences have you noticed from the European music scene? Why did you decide to bring it across the sea?

Christopher: From the composer's point of view, I know that the music scene is very different in the US compared to Europe. Which might be because of the historic differences. The course that music took in Germany was, of course, very specific due to the Second World War. So things like minimalism would never have been possible in Germany or Europe. So I think that generally, a more openness in the US towards new concepts in new music, as opposed to Europe, where I think there’s still a certain kind of academia, one might say. I don’t know if that really answers your question.

Carolina: That’s what I would have said also, but I think you expanded better.

Clite: Yeah, that makes a lot of sense because there’s not a lot of theremin players here in America, so it’s interesting to see where it came from on your end. How did the idea to create this album come about?

Carolina: Christopher wrote Sonata for Theremin and Piano and recorded it in April 2013, just the performance, and put it on YouTube. The producer, Allen Farmelo, he watched the video and he thought it was good, and then he wrote to me and we came up with ideas. So that’s how it all started.

Clite: That sounds great. So what was the experience like working with Allen?

Carolina: I guess that producing an improvised album is very different than producing a non-improvised album of course. He is a very kind person and he puts a lot of effort into his artists and supports his artists. While recording the album, he was actually giving us ideas about the pieces. He was writing down words, and we should improvise, or choose the word, and then we improvise on those words.

Christopher: I think he has sense guiding us through the Improvisations. I guess that's, producing an improvised album is very did than producing a non-improvised album of course, and he was very good keeping us calm, for instance.

Clite: And the album-making experience? Did you guys record together separately and layer tracks?

Carolina: We always recorded together.

Carolina: No, in Brooklyn. In New York.

Clite: And how long would you say it took?

Carolina: We had two days of recording.

Clite: For a whole album? Wow. So why the theremin?

Carolina: I have been playing the theremin for 20 years. My dad works in electronic music and he just came up with the idea, so I have just been playing my whole life. I’m doing classical music, then I met Christopher and we play classical music together, so it’s just, kind of, normal to me.

Clite: When did the two of you start working together?

Clite: And you knew each other from before?

Carolina: I moved to Leipzig and then I went to a composition class, where I presented my theremin, and Christopher was there, and then he asked, or I asked if you wanted to write a piece?

Carolina: I don’t remember, anyway, we just agreed that we would write the first ever written theremin, which we performed in his examination.

Clite: What direction will you take sonically? Are you going to stay classical, go into the electronic realm, or somewhere in the middle?

Carolina: I think we two, as a duo, will stay in the classical, modern music. We will not add any of our electronic stuff. Just stay theremin and piano.

Carolina: Actually, we have just been recording a new album last week, in Leipzig where we live, with old works by Christopher, his First and Second Sonatas for Theremin and Piano. The album will be out next year. We are recording another Improvisation album in January in New York I guess.

Clite: Sounds like you guys are really busy. Are you going to continue to compose and perform as a duo?

Carolina: Yes, definitely. I personally am so happy and so glad that we two met because I love Christopher’s music and we have the same humor and it’s just so much fun to work together and having such a partner is really great.

Christopher: Me too, of course.

Clite: So your friendship keeps the creative process lively and entertaining, when you guys are together?

Carolina: Yeah, it’s not just playing a concert together, or making an album together. It’s drinking coffee and having fun all the time.

Christopher: I think one couldn’t do Improvisations if one didn’t really get along very good personally.

Clite: That’s very true, absolutely true. A question for you, Carolina, are you still working with the Theremin Summer Academy in France?

Carolina: Yes, we actually have three academies now. We do one in spring and another in Leipzig where I live. And we do the summer academy in Colmar, France, and we do the autumn academy in a western town in Germany.

Clite: And how has that been going for you? Are these mostly young students? Or do you have some adults, as well?

Carolina: Usually its adults, and I don’t only teach when it’s the academy. I also have students frequently. It’s usually adults and some kids. I like to teach kids as well. I have a six-year-old student, and it’s really fun to teach kids.

Clite: Very cute. You said you have been playing for 20 years, the theremin. Christopher, what is your background in regards to the piano? Are you classically trained? Have you been playing for a long time?

Christopher: Well, yes. I started when I was five years old, so that’s 25 years of playing the piano. First I studied sound engineering, a German specific thing actually, at the University for Music in Detsmal, a small town in Germany. Then I moved to Leipzig, and I started composition here, that’s how we met. So I still work as a sound engineer, but yeah, composing has grown to be more and more important with me, of course.

Clite: Do you think you’ll do any engineering on your upcoming work with Carolina?

Christopher: Well I will do with the recording that we just did. I probably won’t do for the next Improvisation record, which might be not even necessary, because for the last one, we didn’t do any editing, and I think that will be the plan for the next one, I assume. We haven’t talked about it.

Carolina: We didn’t talk about that. But that’s true. Last time we really didn’t do any editing, just played a piece through. It was part of the concept.

Clite: See that’s fascinating. You must have practiced a lot beforehand to be able to go in and do it in one run through?

Christopher: You practice a lot when it came to the classical pieces.

Carolina: You practice your technique and of course your playing technique. And then you need, for the Improvisations, you just need to be free and just let it go.

Christopher: And hear what the other person is trying to do.

Carolina: And be in tune with the other person.

Clite: Wonderful. Anything else you want your readership to know?

Carolina: Well maybe for the theremin. What we wanted to achieve with this record, with our work in general, is to show the audience what a theremin can do and how a theremin can sound and that it’s not just what most people know about the instrument. That I can do some spooky sounds, hold some notes. That it’s really an instrument that you can play really serious music, not serious, but really great works, and that’s what we wanted to show the audience.

Clite: I can’t say that I’ve listened to it a lot before I came across your album, so you’re definitely on the track there. Anything else that you wanted to add Christopher?

Christopher: No actually, I totally agree with what Carolina said. That sums it up pretty good I think.