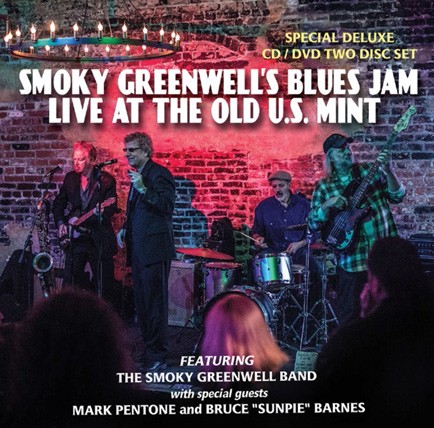 It's a rollicking New Orleans party down in the Crescent City on Smoky Greenwell's 'Live At The U.S. Mint' (Photo : Courtesy Greenwell Records)

Singer/songwriter Smoky Greenwell has been a mainstay in the blues clubs of Louisiana since the 1970s when he first took up harmonica. He's since added saxophone and figured it was about damn time to record and self-produce a live album consisting of tracks from his nine studio CDs. That is exactly what fans get with Live At The Old U.S. Mint, a pure New Orleans blues jam.

The 11-cut party also features versions of Henry Mancini's "Peter Gunn" and originals by some of his guests like guitarist Mark Pentone who penned the irresistible "(Although I'm White) I Earned The Right To Sing The Blues" and accordionist Sun Pie Barnes who wrote "Love's Gone" and "Leroy's Shuffle."

Greenwell's no slouch in the lyric department. His "Between Iraq And A Hard Place" is a blues-encrusted witticism about today that works on a number of levels. You can just dance to it, ignoring its wisdom, or it just might cause you to think. Ultimately, it all comes back to Mother Earth, as the old saying goes. The closer is "Back To The Boogie," because, after all, that's what we're here for. A former member of WAR and Blues Co-op with Warren Haynes, Smoky can entrance and/or make you dance. He's the real deal.

There's something about the blues that's primal. Either you feel it or you don't. Those who don't complain about its repetition, I feel sorry for them. This is a music that--if you feel it--gets underneath your skin and crawls around a little causing you to twitch and spasm with a Saint Vitus Dance of delight. Especially live. Even more so when your guard is down, when your inhibitions are stored somewhere on the left side of your brain. Candy is dandy but liquor is quicker as they say. Go hoist a few and see a live blues band today.