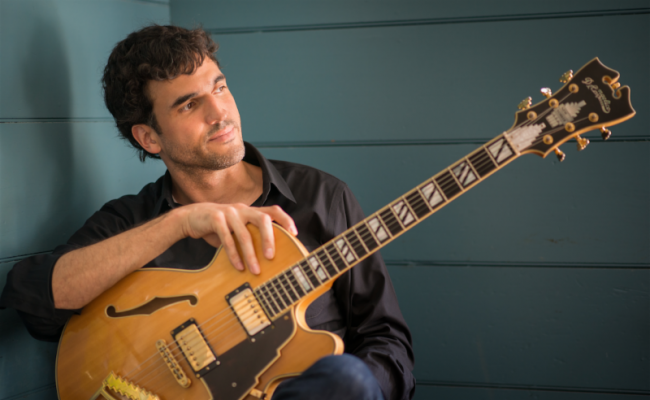 There are colors seeping through the darkness on New York City guitarist/composer Scott DuBois' sixth CD, Winter Light (ACT Music). It's the color of dawn peeking over the horizon ("First Light Tundra"), the color of slanting shards of sunlight as it permeates through the trees ("Early Morning Forest" and "Late Morning Snow"), the color of full bore eye-blinding afternoon ("Noon White Mountain") and the colors of "Evening Blizzard," "Afternoon Ice Fog" and finally "Night Tundra".

This one day in Winter Light is, indeed, captured dramatically in sound by German tenor saxophonist/bass clarinetist Gebhard Ullmann, American bassist Thomas Morgan, Danish drummer Kresten Osgood and 37-year old DuBois, who hears colors. The colors on his 2012 Landscape Scripture (Sunnyside Records) were more subtle, yet that was one of 10 CDs picked by National Public Radio as the best of that year.

DuBois has been a mainstay on the NYC jazz scene since he was 17. His two albums on the Soul Note label with sax man David Liebman (2005's Monsoon and 2007's Tempest) were also amongst the best albums released in those years. His other two albums for Sunnyside (2008's Banshees and 2010's Black Hawk Dance) were wildly experimental but worked within the context of his own inner logic. When he was 27, he was a semi-finalist in the Thelonious Monk jazz competition. In flyers for his shows, the Downtown Music Gallery in Soho called him "one of the best and most adventurous guitarists in NYC." Oh, and did I mention he was big in Spain?

His perpendicular sound collages aren't always at right angles. He's fond of taking a circuitous route to get from Point A to Point B. Then again, fathoming his aforementioned inner logic is half the fun. He doesn't mind if he loses you. I guess he figures you'll just catch up. Whether any of us ever catch up or not, it is absolutely worth chasing him through Winter Light.