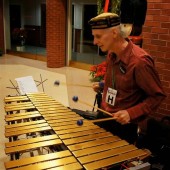 In a 40-year career, Californian Cal Tjader [1925-1982] was a leading proponent of Afro-Cuban jazz, so much so that during the 1960s, he became a superstar in Latin circles, hiring the best of the island musicians and daring to fuse Caribbean rhythms with bebop and swing. 'Blue Tjade' (VOF), by the Mike Freeman ZonaVibe, is a Tjader tribute resurrecting the kind of exciting, pulsing, danceable action pioneered by Tjader that continues on today into tomorrow.