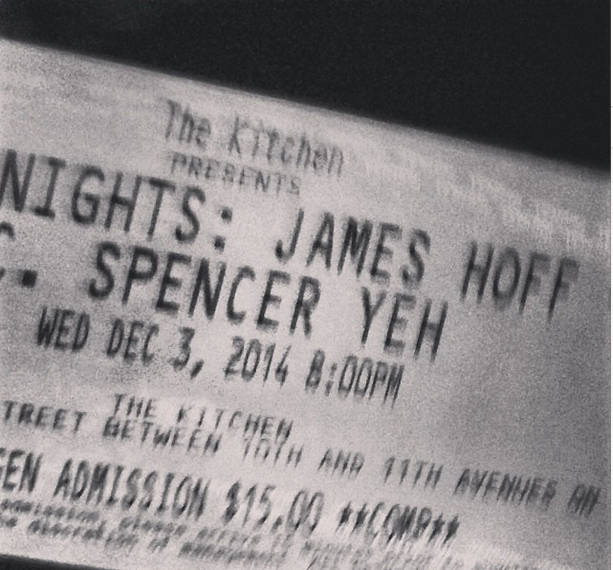 ...this is what my brain sounds like on stress. compounded heartbeats, thumps of dribbling basketballs and the image of graveyard snow also came to mind.

Hoff hopped out of the audience and behind the table of tentacles attached to an especially bright drum machine. He gave BLASTER, (PAN) his latest project featuring 808 electro-inspired electronic music he created by infecting drum machine samples with computer viruses. The deep bass and piercing industrial twinges of white noise evoked but a few head bobs from the audience. The helicopter landing and subway rumble shook the rest awake with a peppering of that reched dial up internet sound.

When he's not concocting electro beats, Hoff creates art. His exhibition about computer virus paintings is currently on view at Callicoon Fine Arts. Yeh has beeen annouced as a 2015 Artist-in-Residence at ISSUE Project Room. To wit, in February Primary Information is set to publish a new record of his vocal based recordings. And his video works will enter distribution by Electronic Arts Intermix in 2015 as well.

The Synth Nights series at The Kitchen is possible because of support by the Amphion Foundation, Inc., Mary Flagler Cary Charitable Trust, The Aaron Copland Fund for Music and The Fan Fox and Leslie R. Samuels Foundation and in part by public funds from New York City Department of Cultural Affairs in partnership with the City Council and New York State Council on the Arts with the support of Governor Andrew Cuomo and the New York State Legislature.