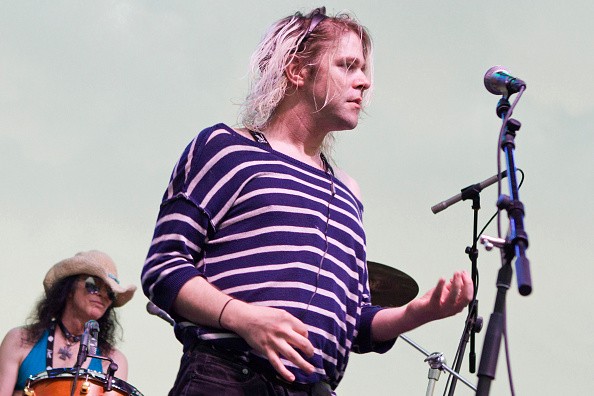 Ariel Pink performs in concert at the Untapped Festival at Panther Island Pavilion on May 09, 2015 in Fort Worth, TX. (Photo : Rachel Parker/DAL/Getty Images)

Ariel Pink is the latest aritst to be featured on American Psycho/Less Than Zero author Bret Easton Ellis' podcast. The two talked everything from last year's release, pom pom, to this beef with Madonna on the public wire.

If you were under a rock last year, Pink became the subject of scorn for Madonna and her fanbase when the quirky crooner said Madge has been on a "downward slide" since her first LP, Ray of Light.

Pink had been asked to help write on Madonna's upcoming LP but the offer was rescinded when news of his opinion hit the airwaves. As the pop diva put it, she had no interest in "working with mermaids."

The songstress Grimes weighed in as well, calling the singer/songwriter a misogynist.

Regardless, Ariel has been on the rise even before the release of his latest disc. With a series of shows in New York City --including two wonderful sold out performances at the Williamsburg hotspot Baby's All Right and the Manhattan high-topper Terminal 5--Pink has become an international sensation abound.

As Pitchfork writes: Today, [Ellis] shared a new [conversation] with Ariel Pink. The two discuss childhood bullies, rock and pop music history, why last year's pom pom was credited solely to Pink, comments about Pink from Grimes and Madonna (whom he says he "loves"), Robin Thicke, and more. Stream or download it here."

For now, catch up on Pink below.

John Maus Shares the Beef on Ariel Pink in Twitter Manifesto, Calls Out the 'Misogynist' as a 'Nymphomaniac'