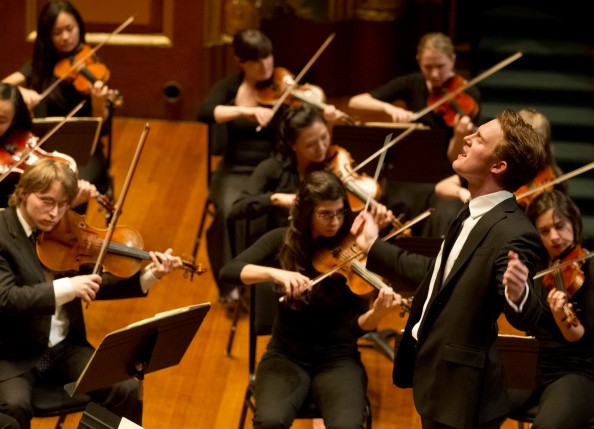 Rap and orchestra, a bond that usually fits in the studio and has become almost a staple of the hip-hop "ballad," has brought students from Berklee and the New England Conservatory (known as the From the Top band) together to back local rapper Lotus Taylor in a Wiz Khalifa cover.

If you're a fan of Wiz himself, or are familiar with the song, then you can hear in the video that the orchestra is up to snuff with the music, hitting a proper beat and paying homage to the song in a most musical manner.

From the Top explains the performance:

"Just down the street from our offices is Berklee College of Music, where we filmed this latest video. Charlie Puth, who wrote the incredibly popular song "See You Again," also happens to be a Berklee grad, as is Evan Chapman, who did the arrangement. In this video, From the Top musicians from Berklee, New England Conservatory, Boston University, Boston Youth Symphony Orchestra, Boston Philharmonic Youth Orchestra, Youth Philharmonic Orchestra, The Juilliard School, Boston City Singers, and Hip Hop Transformation collaborate to create something truly special.

It's a wonderful celebration of music, memory, and hope. And we're not sure, but we think this might be our first rap collaboration. We'll confirm, but in the meantime...enjoy!"

And it is deeply inspiring stuff, indeed, Norman.

Hip-hop and classical aren't totally exclusive from one another. It's true, most major recording artists in the genre, such as Rihanna, employ the use of an orchestra to give their music a different edge. Now, if that's Rihanna's decision or someone else's still remains to be seen.

Nevertheless, the music video was shot on location at Berklee College of Music and features the entire ensemble plus Lotus.

Check out the video below and pay attention the credits beneath it.