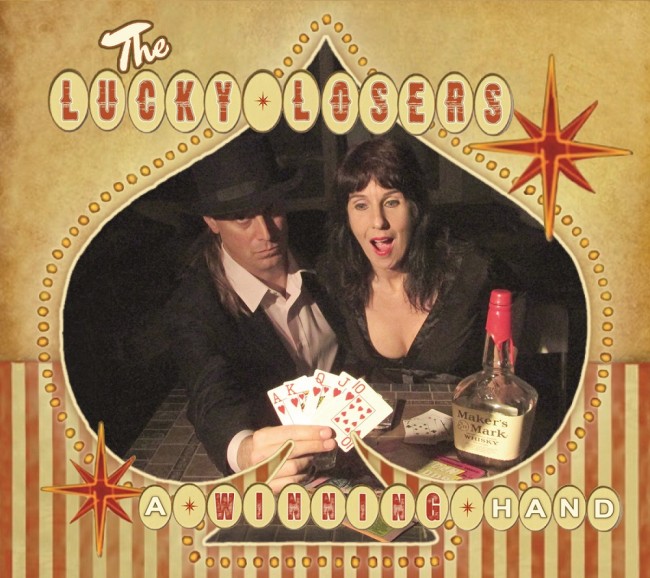 Cathy Lemons has been singing the blues in San Francisco for 25 years. Originally from Dallas, where she sang with Stevie Ray Vaughan, she also toured with John Lee Hooker in 1987 as his female vocal foil. As a leader, her three CDs consist of exemplary modern blues. In fact, despite the late Sophie Tucker being called "the last of the red hot mamas," Cathy Lemons can lay claim to being, if not the last, at least being in the conversation. Phil Berkowitz has been singing and blowing blues harp in San Francisco for 17 years. As a leader, his two CDs are, yeah, exemplary. Put 'em together and you've got The Lucky Losers whose debut CD, A Winning Hand, traverses such American soils and styles as Chicago, Texas, Memphis and New Orleans amongst its six covers and six originals.

A good blues duet CD is a rarity these days. When they wrap their considerable pipes around Sam & Dave's "I Take What I Want," for instance, it's as if Delaney & Bonnie took over Stax Records. Whether they're covering Allen Toussaint ("What Is Success") or Bob Dylan ("What Was It You Wanted"), their voices slip-slide over, under, sideways and through each other. With guitar/bass/drums, kickin' horn arrangements, the liquid spill of a Hammond B-3 organ, back-up vocals and a big old Wurlitzer piano in the mix, these two shed their solo skins to fit together tight.

You want some jazz? One of their originals, "Suicide By Love," is not only dark but hot like a torch from another generation. "Suicide by drink, suicide by drugs, suicide by gambling" she purrs, until she realizes love is just as bad and has remembered that Leonard Cohen once wrote "there's no cure for love." Willy DeVille once sang there's "no such pain as love," and, of course, science plus many songs tell us "there's no such thing as love." Cathy Lemons sings her suicide song with a wink and a nod. She's ready to commit. But to what?

Highlight? Tough call. It's about time, though, for the seventh cover (by my count) of that powerful duet between Brook Benton and Dinah Washington ("Baby, You Got What It takes"). They even recreate the famous mistake Brook made when he stepped on Dinah's line and it was left in, only to climb all the way to #1 in 1960.