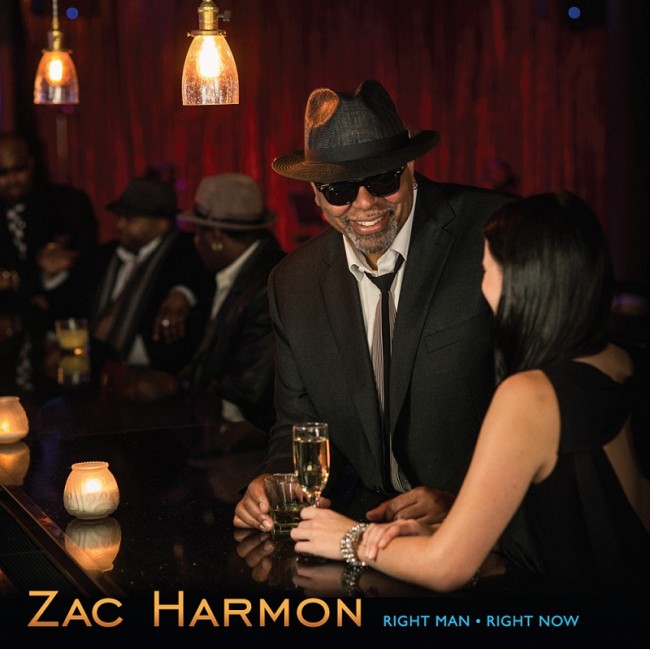 Zac Harmon is on the prowl as he tells the pretty young things about his new 'Right Man Right Now' CD (Photo : Courtesy Blind Pig Records)

In Zac Harmon's case, the little girls (at least as the song goes) understand. He's certainly not Mr. Right but he is Mr. Right Now and he wants to seduce your daughter...or your wife. Danger, ever since Jerry Lee Lewis, has always been implicit in the best rock'n'roll and when it comes to the Zac man, he will rock and roll all over you, mister, and you will like it. I sure do. Technically, he's a blues man but on Right Man Right Now, released on Blind Pig Records, he throws categories to the four winds and lets 'em blow.

Who else gonna sing about that "Hump In Your Back"? And when he actually improves upon John Lee Hooker's "I'm Bad Like Jesse James," he leaves you panting and wanting more. "Raising Hell" should be the stand out single. It features blues hotshots Lucky Peterson and Anson Funderburgh for a mini super-session of sorts. However, it's all about the horns when that trumpet and saxophone get to blowin'.

This is a party. Zac's your host. He's a man of wealth and taste. He's been around for a long, long time, writing, singing, playing guitar and a bit of organ. He came out of Mississippi where the wild things grow, where Elmore James came to prominence, where his dad was the local pharmacist and from whom Muddy Waters picked up his meds. His next door neighbor hosted Cab Calloway at house parties. Zac was 16 when he started gigging. At 21, he moved to Hollywood, producing Freddie Jackson, The O'Jays and reggae's Black Uhuru.

In 2003, he finally became a full-fledged bluesman with a live debut and, two years later, a studio debut. His stinging of that ax drew comparisons to Luther Allison and he toured the globe, including playing for U.S. soldiers in Iraq in 2008. A year later, he released From The Root and a year after that he was back in L.A. starring in the film Black and Blue.

Right Man Right Now is his first all-new studio session since 2012's Music Is Medicine and he's taken a few licks right out of the Buddy Guy handbook. His shows are theatrical extravaganzas and he still stings it with the best of them. This might be his best yet.

The Last of the Delta Blues: Photographer Lou Bopp Captures the Last of a Dying Breed in Mississippi