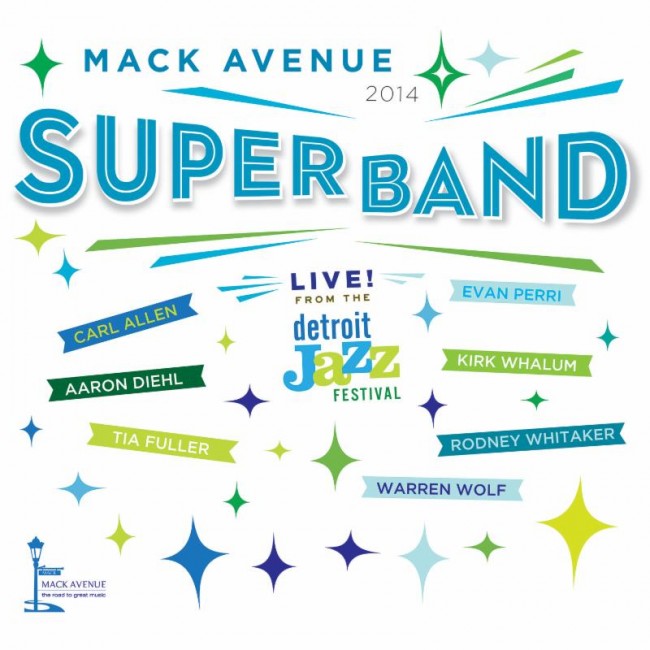 What a great idea. More labels should host blowouts like this for artists who lead their own bands yet play this annual jam. Oh to have been in Motor City last year on Labor Day weekend at Hart Plaza when Detroit-based label Mack Avenue hosted its Live From The Detroit Jazz Festival 2014.

They warm up with Herbie Hancock's "Riot" and everyone gets a pop. First solo belongs to vibraphonist Warren Wolf. Guitarist Evan Perri, of Hot Club Of Detroit, is up next and knocks it out of the ballpark with gypsy flair. Pianist Aaron Diehl-whose Space Time Continuum is one of the label's best this year, tickles the ivories before bassist Rodney Whittaker (who also served as Music Director) gets in his licks almost in anticipation of a blowout song-ending solo by drummer Carl Allen.

Hardly a "cutting contest" like '30s/'40s jazzmen used to do to demean each other in proving their superiority, here politeness reigns but doesn't diminish. The rest of the program is all original. Tenor saxophonist Kirk Whalum, who stole the show in 2013, continues his mastery as he shows off his deep blues roots on "The Struggle." Bassist Whitaker (who shines on his 2014 co-led CD When We Find Ourselves Alone with drummer Allen) wrote "A Mother's Cry" as the theme song to the PBS documentary Malawi & Malaria: Fighting To Save The Children. Here, with Whalum on flute and Tia Fuller on soprano sax, the piece is meditative yet melodic with a soothing and satisfying bass solo that has the rambunctious crowd dead silent.

Whalum's "Bipolar Blues Blues" belies his usual "smooth-jazz" typecast with gutbucket fervor and gets as close all evening to those famed cutting contests when he and Tia on soprano again (she's usually on alto) engage in a back-and-forth musical discussion that lights up the night to close things out.

It's safe to say these events are more than the sum of their parts. It's where smooth gets rough and commerciality takes a back seat to artistry. I hope to be at one of these in the near future. Next year's lineup has already been announced.