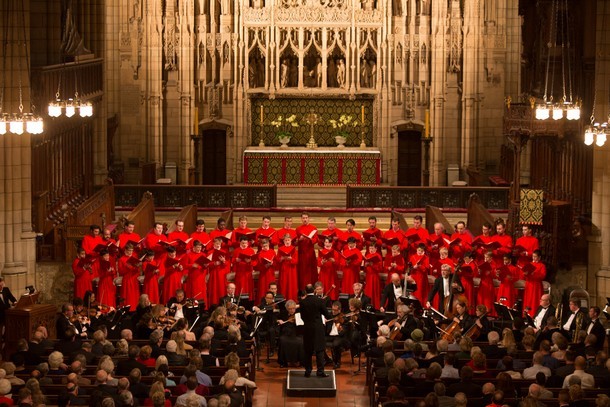 The Saint Thomas Choir of Men and Boys with the Orchestra of St. Luke's, conducted by Andrew Nethsingha, performing Mozart's 'Requiem' and Haydn's 'Missa in Angustiis.' (Photo : Ira Lippke, courtesy of Dan Dutcher )

On Thursday, November 12th, the St. Thomas Choir of Men & Boys, performing with the Orchestra of St. Luke's, gave a stunning performance of Mozart's unfinished, but nonetheless incomparable Requiem in D minor, and Haydn's Missa in Angustiis (the Nelson Mass) at St. Thomas church. Also joining the ensemble were four renowned soloists: Soprano Katharine Dain, Mezzo-Soprano Brenda Patterson, Tenor Dann Coakwell and Bass-Baritone Charles Perry Sprawls. The magnificent caverns of Manhattan's 1914 Episcopal church bellowed with the majesty of these perennial works in concerted memory of John Gavin Scott (1956-2015), the parish's resident organist and music director who sadly passed away this past August. Having served the St. Thomas choir for nine years, the school staged this event to honor the man who gave their chorus school so much of his time and dedication. Following an introduction by Rector Carl Turner, who touted the merits of St. Thomas Choir of Men & Boys' unmatched chorus school, the evening gave rise to an immense crowd, fit for a beloved director with an immense legacy.

As any lover of requiems knows, Mozart's unfinished requiem, the Requiem in D minor, stands as a testament to the composer's genius and his passion for his work, even in his final death throes. The mysteries surrounding the completion of the work stem from long-held confusion about which elements were solely Mozart's and which were adapted by the commonly-accepted completionist, Franz Xaver Süssmayr. Since Mozart left sparse notes on how to realize the Reqiuem's completion, many musicologists have attempted alternative revisions of the piece. Despite the St. Thomas Choir's choice to pursue the traditional version, they fashioned it in such a way that one might never know the hand of Mozart fell away cold in certain (now well-understood) intervals.

The introduction, the "Requiem", bears the unmistakable stamp of Mozart, endowed with the engrossing continuity and the consummate voice leading that has kept Mozart's music alive and eternally relevant. The bassoonists immediately evoke an enigmatic soul in their brief moments of dissonance, yearning for some form of solace. They would be denied that solace, threatened further, in fact, by the sudden onslaught of the men and boy's choir. Here, the true torture of Mozart's final moments comes to fruition, with every element increasing in intensity. It took Soprano Katherine Dain to finally release the spell with her exquisite and silvery entrance.

It was also, in these moments, that the power of the venue itself came to light. To those who have only heard the works of Mozart in the confines of a symphony hall or an amphitheater, one is liable to miss the natural reverb found only in the Requiem in D minor's intended arena: the cavernous halls of churches or cathedrals, which, when arranged for performance, conjure up a commanding acoustic experience unmatched by modern engineering.

Once Mozart's Requiem flowed into the "Dies Irae", the soloists were hoisted to the spotlight, beginning with the stentorian pairing of Tenor Dann Coakwell and Baritone Charles Perry Sprawls, and from there to the glistening alto and soprano. Securing incredible volume-control over the great hall, the soloists used Mozart's thematic structure to prove their worth in both the solo and group settings. Indeed, as the audience gradually lost themselves to the music, it was apparent that while individually they were incredible spectacles to behold, together they were a force of nature.

As the movements progress, one could almost get the sense that the Requiem is, wonderfully, too big for its britches. With Mozart stoking his own concepts with more fuel in the fire, the mass overflows with raw emotion, almost unbefitting a mass. The seemingly endless "decibel-cap" forged by the male choir maintained a sense of terror, which, although periodically interjected by moments of delicacy, seemed utterly untamable. The baffling "Confutatis" stirred conflicting emotions (as Mozart intended) with its indiscriminate pitching between devilish fear and angelic beauty. And, although the sections fulfilled by Süssmayr are noticeably more ambiguous (perhaps so as not to confuse the overall direction of the piece), the St. Thomas Choir of Men and Boys managed to rally its performers around a singular vision to revive this timeless work.

The Saint Thomas Choir of Men and Boys with the Orchestra of St. Luke's performing Mozart and Haydn at St. Thomas Church,  conducted by Andrew Nethsingha. (Photo : Ira Lippke)

For the evening's second act, Haydn's Missa in Angustiis (Nelson Mass) was a welcomed, if slightly lesser known mass. The third of Haydn's six late masses, Missa in Angustiis  in many ways exhibited more energy than Mozart's Requiem. Less mired in tragic elements, and more infused with the "glory, glory, hallelujah" one expects in a traditional mass, musically this equated to a great deal more pomp, vigor, and virtuosity in the soloists' performances. At the outset, even when a considerable amount of negative energy is expelled, the payoff is such a cavalcade of vocal runs, wails, and curlicues that one is more likely to be invigorated by the spectacle than turned hopelessly inward.

This procession of "glory" persists until the first true bass aria emerged ("Qui tollis"), a piece that, with its surprising move to Bb Major, brought a tender and prayerful air to an otherwise volatile piece. In this section, the talents of Charles Perry Sprawls are unveiled in a bigger way than the Requiem permitted. Hardly an undercurrent of brute force, Perry commands a versatile baritone and has mastered the capacity to project the subtlest inflection throughout the hall.

Interestingly, the bulk of the mass was almost a patriotic venture, as if the tale of a battle were being told instead of a prayer service. The only thing to break cognitive dissonance were the arias, of which the most distinctive (following Perry's), "Et incarnates", was taken by Soprano Katherine Dain. In these moments, the piece settled down and yielded to the individual (or the soloists as a unit) before rallying the entire men & boys choir once more in a maddening whirlwind of step-wise leaps and escapes.

Having opened with Mozart's manifestation of solemnity, and exited with Haydn's impish version of rejuvenated hope, this Thursday's event was a stirring memorial to John Gavin Scott -- the life-long musician who was surely there in spirit -- and a triumph for all performers involved.