BLOGARRHEA: Brilliant New Documentary, 'Sinatra: All Or Nothing At All,' is American History 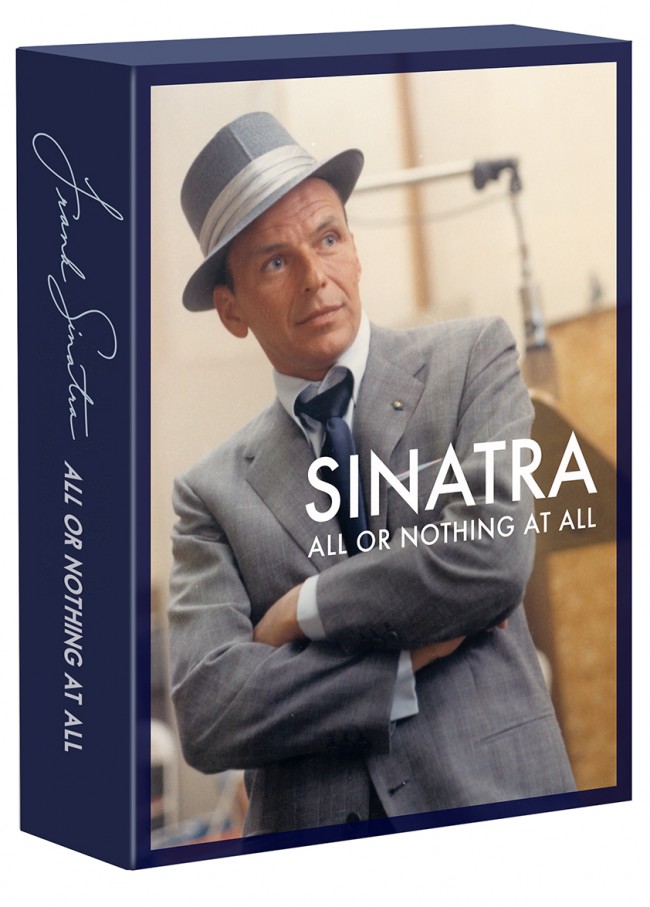 Sinatra: All Or Nothing At All (Eagle Rock Entertainment) is, although idolatrous in tone, the best Frank Sinatra documentary yet. With clips of the man in his prime to politics, civil rights and friends in high places from Senator John F. Kennedy to notorious gangster Sam Giancana, the music is riveting, the Rat Pack comes alive again and if you think you know all there is to know about Ol' Blue-Eyes, think again.

His liberal views get him branded as a Communist. He doesn't back down when the ugly stain of racism hinders his ability to sing with legends like Louis Armstrong and Count Basie. Black musicians, in fact, gravitate towards him and he seems to come to life with the sound of jazz accenting his shaping of the Great American Songbook. Coming up, he would scoff at the racists. Upon stardom, he stuck it to them whenever he had the chance. In fact, you could call Sinatra a Civil Rights champion for not backing down...especially when it came to his good friend Sammy Davis, Jr. The movie even has enough gumption to question why he and Dean Martin would heap racist invective upon Sammy as comedy on stage as The Rat Pack becomes superstars.

With Kennedy patriarch Joe pulling the strings, Frank helps the Senator get elected by tilting the Illinois vote with help from his mob connections. Little did he know that one of the first things the president-elect would do would be to install his brother Robert Kennedy to go after the mob. Robert's a bulldog. When Joe tells John to tell Sammy--married to the white May Britt at the time--that he'd have to disappear from their circle because it just doesn't look good, John pussy-foots around the issue so Robert--described by an insider as someone who has no trouble smiling in your face while sticking a knife in your gut (figuratively, of course)--to do the dirty work. He does and ultimately Sinatra himself is blackballed by the Kennedys. So he turns Republican. This back-stabbing hurts him deeply and, combined with his hatred of all things counter-culture (including rock 'n' roll), he winds up campaigning for Reagan and Nixon (becoming particularly close to VP Spiro Agnew).

That alone would make for a great story but add the music, the rare in-concert moments where you see the man at the height of his powers, late-in-life but definitely in control of a room, and you have the kind of American History 101 that is mesmerizing. At his famous 1971 Los Angeles "Retirement Concert," he kills it! This reporter had never seen him so vital and commanding. As the action unfolds with Sinatra himself doing voice-overs (taken from years of interviews and beautifully woven into the storyline by director Alex Gibney), you truly get a sense of the man like never before. The home movies, the personal moments preserved for posterity, the relationships with his Rat Pack friends, the ups and downs of his career, they're all there.

Particularly moving is his career slump. By 1952, he had lost his record contract, and was seen as a has-been. Then the Oscar for his brilliant portrayal of Private Maggio in From Here To Eternity revitalized his career. With solid chunks of song, with great history (close to Humphrey Bogart, he fell in love with Bogie's widow, Lauren Bacall, and even fashioned The Rat Pack after Bogie's circle), the movie goes by in a blur of images to the point where you do not want it to ever stop. In fact, there's too much for one sitting. This is that rare brand of doc that-between the performances and the behind-the-scenes looks-is certainly worthy of repeat watchings.

For the Old Folk: Bob Dylan Gives Away 50,000 Copies of Sinatra LP 'Shadows in the Night' to AARP Subscribers