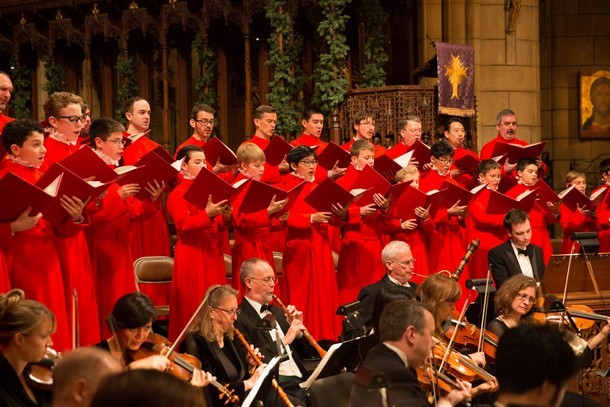 While it stands to reason that Handel’s Messiah -- with its continued circulation and worldwide appreciation -- would go on to refine itself over the centuries, the St. Thomas Choir of Men & Boys and the Concert Royal have yet to falter on their annual tradition: the pillar Christmas mass, a full-length two-and-a-half hour arrangement of Messiah, performed for its encore act on December 10th at St. Thomas Church. A faultless attention to Handel’s dramatic sensibilities and an unremitting stamina over the course of that time were, together, the ensemble’s greatest assets. Especially in the continued sorrow of organist and choirmaster John Gavin Scott’s passing in August, the meditative "life and death" tale of the Messiah seemed to take on renewed value this particular season. Much like Mozart's Requiem proved back in November, the choir seemed determined to excel in the organist’s wake, and most assuredly in his honor.

Messiah’s opening night -- a Tues., December 8th performance, which received a raving review in the New York Times -- hardly diminished the fortitude upheld by the ensemble through the end of Thursday’s event. Known as the foremost choir school in the United States reared in the Anglican tradition, the St. Thomas Choir of Men & Boys was joined by the Concert Royal, an orchestra trained in historically informed performance, which dazzled the audience with an eclectic array of original instruments. The ensemble was also led by four consummate soloists, the first of which, Tenor Isaiah Bell, broke the spell of silence in the overture’s aftermath with a tranquil and enchanting arioso.

The entirety of Handel's Messiah, which premiered on April 13th, 1742 in Dublin, Ireland, was actually written as an Easter offering, despite premiering in the "secular context" of a concert hall, and despite growing into one of the most widely-performed Christmas oratorios in Western history. The first scene is an especially joyous and celebratory affair (as Handel may have secretly wished to impart the spirit of the Messiah onto a doubting audience). By the composer’s own words, “I should be sorry if I only entertained them; I wished to make them better.”

It is perhaps for this reason that he wrote the opening arioso to be so uniquely captivating, and why he demanded such intense musical piety from the tenor. Isaiah Bell delivered on this piety as if caught in a trance of joy & admiration, and then went on to capture the hearts of St. Thomas Church with his following aria, crooning: “Every valley shall be exalted, and every mountain and hill made low…” The inflection with which he approached the second phrase was impossible not to delight at, as every lilt and flutter to the words “…the crooked straight, and the rough places plain,” was accompanied by a deep gaze into the heavenly landscape that Handel envisioned (as interpreted from the prophecy of salvation made by, coincidentally, another Isaiah: Isaiah the Prophet).

Scene II saw the introduction of Bass David Grogan, whose thunderous recitative consumed the halls of the church. Once described by the Albuquerque Tribune as having the capacity to pivot between “the voice of doom” and “the light of revelation”, yet another emotion seemed to take hold in an entrancing moment in his Scene III arioso, “For, behold, darkness shall cover the Earth" -- a moment where doom is twisted into salvation. Here, in a contrasting nod to the "bright side" of Judgement Day, Handel’s dramatism forces him to leap ahead in time as a composer, and incorporate a beautiful, if fleeting, ninth chord for the line, “And the Gentiles shall come to thy light.” Very often, in Handel’s ariosos, as well as his arias, the second phrases (or ‘b’ sections) signify an emotional inversion of the same theme. The lyrics often present a series of paired themes: i.e., wherein revelation resides within doom & salvation; wherein nobility resides within courage & humility, etc. Lyrically, the messages are often consonant, but the music is used to explore the complexity of these pairs, bisecting Handel's arias into distinct emotions and musings. This same concept was epitomized even later in the oratorio. 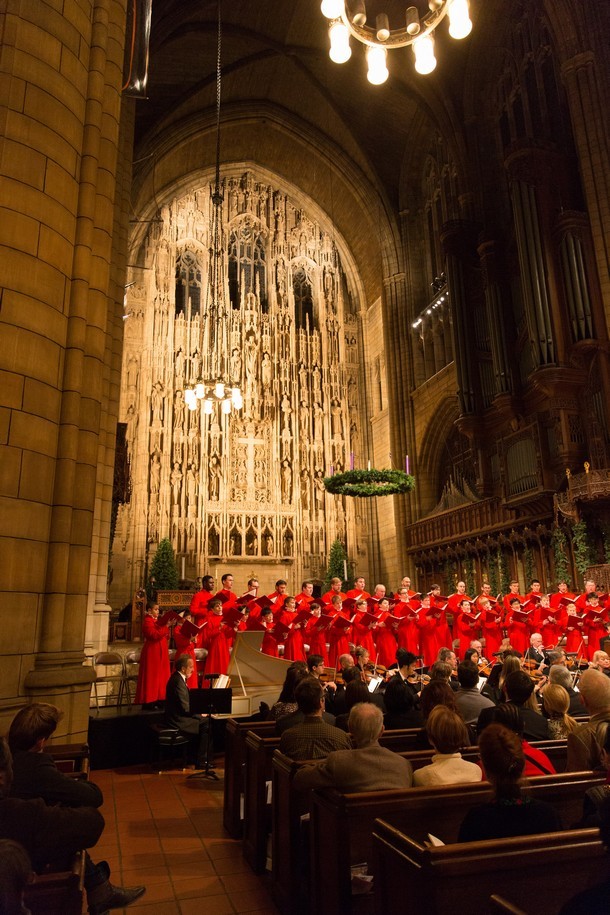 Ever since Scene II of Act I, Mezzo-Soprano Meg Bragle’s initial role in Handel's Messiah was to express a kind of spiritual concern. Even in Scene III, with the spreading of good news, “O thou that tellest good tidings to Zion” (which has become a beloved Christmas carol over the years), the merrily “skipping” melody seemed laced with reservation -- a native darkness that would be used to spectacular avail in the second act: Christ’s Passion.

Here, in the opening aria to the second act, Meg Bragle epitomizes the emotional duality of Christ’s passion, starting with a slow, deliberate, and daunting ‘a’ section: “He was despised and rejected of men; a man of sorrows, and acquainted with grief.”   Alongside a meek and delicate response by the Concert Royal -- who, in their period performance style, improvised trills in the rarely-heard curlicues of the late Baroque -- St. Thomas's own church bells could in fact be heard, serendipitously, in the background amidst the generous breath marks.

Having leapt through the life of the Messiah, the second act primarily concerns the death of Christ and the inherent anguish of those final hours. Bragle’s aria (like Grogan’s earlier) also proposes two sides of the same coin: that a true understanding of the “passion” resides within defeat & scorn. While Handel’s compositional use of "defeat" was, in this instance, wrenchingly obvious, a vigorous and scornful second phrase (“He gave his back to the smiters, and his cheeks to them that plucked off the hair; he hid not his face from shame and spitting”) inverted the story of the passion into one of drama and anguish as well as defeat and submission.

Not-so-serendipitously, the sounds of Manhattan’s sirens could also be heard during Bragle’s most meditative closing phrases (a tortured recapitulation to the ‘a’ section, accompanied by a stifling ritardando). In inevitable New York City moments like these, the entire audience knew the score, closed their eyes, perhaps pictured the quietude of Dublin c. 1742, and marveled at the phrasings of a deeply expressive vocalist, unfazed by her surroundings and thoroughly in her element.

Meanwhile, the St. Thomas Choir of Men & Boys seemed to gain an intrepid force onward throughout the evening, a feat which, over the course of a two-and-a-half hour set, must have been the culmination of some demanding rehearsals -- rehearsals that honored a strict attention to balance and a conservation of power. This allowed Handel’s music to maintain its liveliness throughout the event, and kept the choir from losing steam. Carefully directed by guest conductor Gary Thor Wedow, the hard work of the choir-mates shone through to the Messiah’s penultimate “act finale", the all-too-familiar chorus, hymn, and carol: “Hallelujah” – for which the Messiah is most widely known. For this performance alone, all members of the audience rose in symbolic praise.

The entire second act was dotted with subtle delights, including a removal of the horn section to the gallery (as if to symbolize a heavenly clarion call for Christ’s reception in heaven). To follow, the horns were relocated to the orchestra grounds, so as to bolster the pomp and grandeur of “Hallelujah" -- another testament to the ensemble's attention to balance.

The third act, which concerned the coming of Judgement Day and the return of the Messiah, introduced a stirring aria by Soprano Elizabeth Weisberg, who set up the “Promise of Eternal Life” scene with an air of hope and contentment. The act, however, continued to deliver upon the fearsomeness proposed earlier. One particular delight, to this effect, was to witness how seriously the choir had taken their acapella chorus: "Since by man came death, by man came also the resurrection of the dead". In having the Concert Royal taken out from under them, the choir indeed channeled a sense of “doom” & fear (which rivaled that of David Grogan's), and, amongst all sections of Handel's Messiah, was now at its most palpable.

From that point forward, the audience was met by an overwhelmingly uplifting experience: a spectacle of enthusiasm manifested in the convulsions of conductor Gary Thor Wedow for the finale and closing night of St. Thomas’s 2015 Messiah event series. A memorable one, indeed.