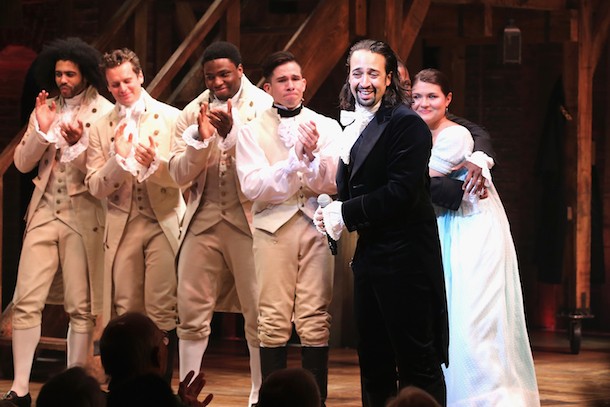 Everyone’s buzzing about Hamilton, the Broadway musical about forefather Alexander Hamilton. With the buzz comes conceptual fan art in the form of a Disney movie, a “book report” on Hamilton written strictly with knowledge learned at the performance and more.

For the former, artist Pati Cmak took an idea that started out as a small tribute to the show and expanded it to fit an entirely different medium. The musical itself, indeed, has notions of Disney interspersed through the dialogue and storyline and certainly can be juxtaposed with children-based formats like Disney.

But the product doesn’t just pay homage to the play but to the inspiration felt from attending it. Cmak, a second-year student at The Animation Workshop in Viborg, Denmark said that the art “is just me dealing with [the] vast amount of feelings the musical gave me.”

And those feelings are mutual among many of the shows attendees.

Also in tribute to the performance, a young audience member (or so we’re led to believe) conjured an entire report based on the knowledge he acquired at the show. While the young theatergoer might have some gaps in their knowledge (we advise supplement material for any Broadway performance about history) they certainly took a keen eye to what the performance was about.

“After [the Revolutionary War] Hamilton became the Secretary of the Treasury and started feuding with Thomas Jefferson, the Tupac to his Biggie. Hamilton didn’t like Thomas Jefferson because he was the only founding father to own slaves? But also because he was a better rapper than him. But they had to come to an agreement about America’s debt so they had a dinner party that Aaron Burr wasn’t invited to.”

It was also written, “[Hamilton] was America’s first Secretary of the Treasury, founded the New York Post, and together with his friend and rival Aaron Burr invented rap in 1776.”

Kids do say the darndest things and if rap were invented in 1776, it would be an excellent detail to include in a brief history about music.

If you can’t catch a show since Hamilton is the hottest thing on the stage right now, you can get a glimpse of why the performance is yielding so much praise and attention below.