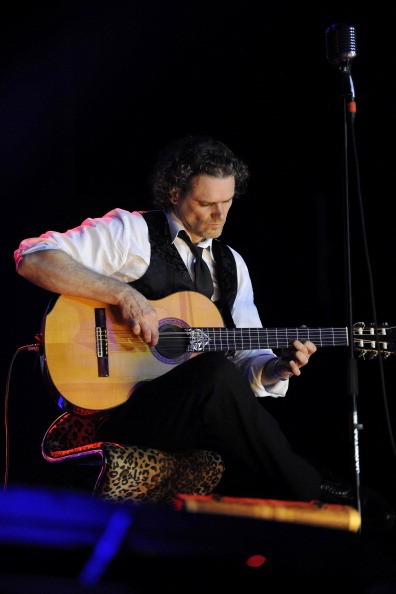 Cook speaks through his guitar at once with passion and ease. His licks can be both declarations of war, then come back in the next track and be very tender and fragile. Also, Cook is not afraid to cross genres and is quite adept at landing in that one genre or another and adapt to it with ease. He is a musical sleuth, in the vein of Herbie Hancock, forever searching and prodding the sound that he makes.

The first song, "Shake," launches with a percussive beginning that conjures Simon and Garfunkel's "Cecilia". It remains the backbeat of the guitar as Cook's guitar invades and we are immersed in the passion of the moment. Cook and his band lay out the scene, the moment. It is your job to provide the characters.

"Taxi Brazil" follows. Light and airy, with a distinctly samba feel to it, Cook allows for peeks at his flamenco guitar styling. Don't blink, though, because he is off and running again...

To "Once", where he slows down and waits. For what? A lover maybe? Each note he plucks is meaningful and deliberate. No scampering about.

But then we move on to India and "Bombay Slam". This song captures the magic of Bollywood and, as you listen, an entire Bollywood dance sequence crafts itself in your imagination.

"To Your Shore" begins with the faint echos of Crowded House's "Don't Dream It's Over," and it lingers in the background trying to force its way back in. It provides the atmosphere to a hauntingly beautiful composition.

"Three Days" is bare bones and reflective to begin with. The rest of the band comes in a little bit later, but Cook's guitar never shakes its melancholy. A beautiful piece of art set to sound.

"Tommy and Me " is a sly sort of piece. From its intro, Cook's guitar moves with purpose and poise. It is on a mission and doesn't have time for frivolities. "Tommy and Me" is a great companion piece to "Bombay Slam".

"When Night Falls" is another reflective track. It is the end of the day and Cook is taking stock with the aid of his guitar. An elegant piece of beauty.

"Steampunk Ricksaw" had high expectations because of its title. If you're going to have a such a creative title, you'd better come prepared to back it up and the whole band aids Jesse Cook in painting a vivid soundscape. It wasn't quite what I was expecting, but no less powerful.

"Beneath Your Skin" and "Breath" are somber, fragile works of art, delicate yet sturdy. That also could serve as an apt description of Jesse Cook's playing.

One World takes you on a magical journey that both thrills, makes you want to get up and dance, and share it with someone you love dearly. It isn't so much jazz as an experience, a beautiful moment in time, made all the better by the distinctive soundscapes that Jesse Cook and his band paint.