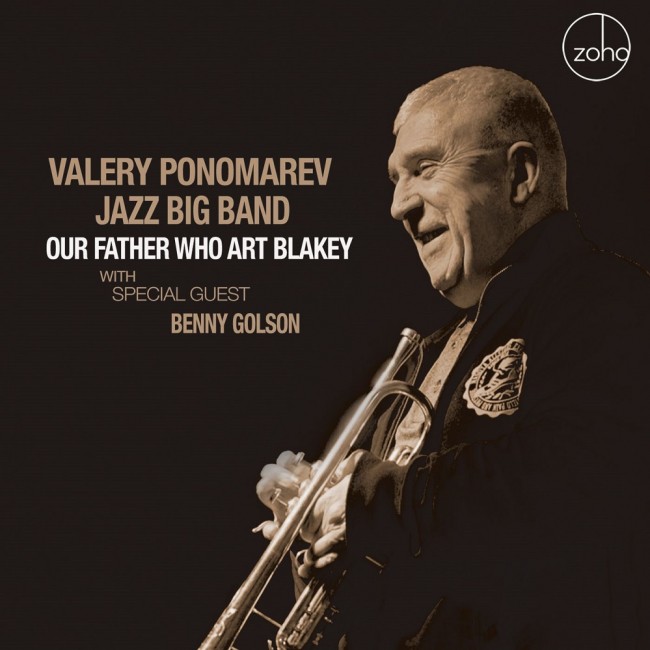 Russian trumpeter Valery Ponomarev debuts his Jazz Big Band on a tribute to his mentor, Our Father Who Art Blakey (Zoho Music). So many great jazz men came through the ranks of Art Blakey's Jazz Messengers.  The drummer practically led a finishing school for future stars and his graduates included Wayne Shorter, Wynton Marsalis, Branford Marsalis, Keith Jarrett, Mulgrew Miller, Chuck Mangione, Benny Golson, Lee Morgan, Woody Shaw, Terence Blanchard, Valery Ponomarev and dozens of other youngsters who he prodded, poked and made them earn their stripes from 1947 to 1990, just weeks before he died of lung cancer.

Sax man Golson is on hand to lend weight to a tune he played with Blakey for years, "Blues March," a rambling 15:54 that gives the brass section room to move and the woodwinds some fleeting moments of ecstasy, all wrapped in a wildly marching beat by drummer Victor Jones. Golson is also on "Moanin'," a Bobby Timmons tune that the 1958 Jazz Messengers used to call its members back up on stage with after a break, but that now has turned into a standard.

"Crisis" is from a 1961 Messenger album (Mosaic) with up'n'comer Josh Evans playing the original Freddie Hubbard trumpet role. Duke Jordan's "Jordu" is from the Clifford Brown-Max Roach Quintet but since the tragic Brownie grew to fame as a 1954 Jazz Messenger, his original solo has been transcribed and harmonized for an exquisite trumpet (Chris Rogers) and tenor sax (Peter Brainin) conversation.

It took some doing to get Blakey's small band arrangements fleshed out for this big band. Ponomarev is an exacting arranger, especially on Blakey's "No Hay Problema" which the master originally performed on the 1959 soundtrack to the French film Les Liaisons Dangereuses.

Valery Ponomarev arrived in New York City in 1973. It was no small feat. Documented in both book (On The Flip Side Of Sound) and film (Trumpeter From Russia), this brave musician will always consider himself a Jazz Messenger.