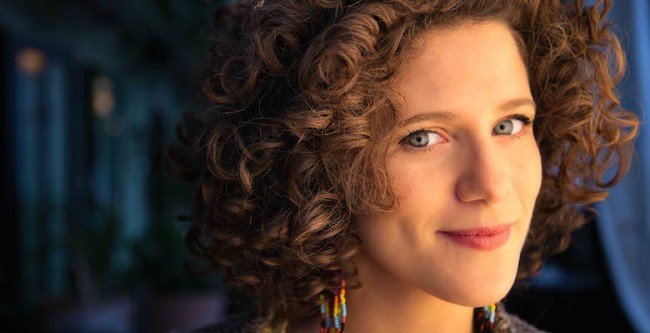 As the follow-up to singer Cyrille Aimee's promising 2013 Mack Avenue Records It's A Good Day debut, Let's Get Lost should catapult this intriguing woman into the upper echelons. At 31, she stands on the brink of stardom. Beautiful, talented, precocious, funny, cultured, with the kind of instantly-recognizable voice that has no known precedent, she goes from Sondheim and Piaf to jazz legend Oscar Pettiford ("Laverne Walk") and Dominican superstar Juan Luis Guerra. Her band is also unique, boasting an Australian bass/drums rhythm section and two guitarists, one doused in Gypsy Jazz, the other an electric lead. In this exclusive interview, Aimee proves to be a women you can love in any language!

Cyrille Aimee: I do not know them. I have been so influenced by all the beautiful musicians who have crossed my path. This is my eighth CD. The previous record, It's a Good Day, was the first project I did with this label and this band. The difference between the two records is mood. If the last record was the sun, this one is the moon.

Blogarrhea: What was your approach going into the studio? Did the finished product come close to what you heard in your head upon inception?

CA: Ah yes, you see, the previous album, It's A Good Day, had the exact finish I heard in my mind beforehand. One guitarist lives in Paris, one in Brazil. It was my idea to bring them together with the bass and the drums so I went to seek the help of [guitarist] Michael [Valeanu] because I wanted a wider approach on the arrangements. I knew what kind of mood I wanted for each song. I had each groove in my mind already, even including each intro and outro. Michael put each guitar in perspective for me. Only when we actually got into the studio did the music come to life! But for Let's Get Lost, this same band has been working together playing hundreds of concerts for the last three years. In that time, we lived through ups and downs and became a family. The repertoire was created on the road as we travelled, backstage, on the bus, in hotel rooms or even right onstage when we're jamming. So, by the time we got in the studio, it flew by being super-easy. It took a lot less time than the first one, because we were already such a tight band that we all knew exactly what needed to come out.

Blogarrhea: Who picked the songs?

CA: Most of them, I did, because I'm the one singing them [laughs] and, for me, lyrics are very important. I always want to make sure I can relate to a lyric. That way, the audience can relate. The title track was always a favorite of [producer] Fab [Dupont]. He thought it would be great to record so we looked into it and, yes, it turned out great. Every song has kind of a story, y'know? Some songs I've known for a long time, and I've always wanted to record them. Some songs are brand new to my repertoire. Some are originals.

Blogarrhea: Tell me a bit about the opening track, Stephen Sondheim's "Live Alone And Like It" from the 1990 film Dick Tracy. It sounds like it's about celibacy.

CA: It is! To me, there's many ways someone can approach deliverance. I believe this song celebrates independence. ["On your own/with only you to concern yourself/doesn't mean you're lonely/just that you're free/Live alone and like it/Don't come down from that tree/That's the answer for me."] I think we're in a society where being alone and single is almost a negative. People are on all these websites to relieve the "sickness" of being alone. I think solitude is more than just alright, it's necessary. That's what drew me to these lyrics.

Blogarrhea: Do you have a boyfriend?

Blogarrhea: Is he part of your musical world or outside of it?

CA: He's very much part of it.

Blogarrhea: So it's either your producer, drummer, bassist or one of your guitarists.

CA: [laughing] You're narrowing it down!

CA: I did. It's a song that my mother used to play for my sister and I at night when we were little. She was from the Dominican Republic. Guerra's music was always a big part of our lives growing up. He was her favorite Dominican composer and she would play his music a lot. He made Merengue but this is a Bachata that we turned into something else. I wanted to play a song from my country because when nowadays when I go back to the Dominican Republic, the love that these people have for me is really incredible. They're so proud to have me being the Dominican jazz singer and so I felt, for a long time, that I owed them that. 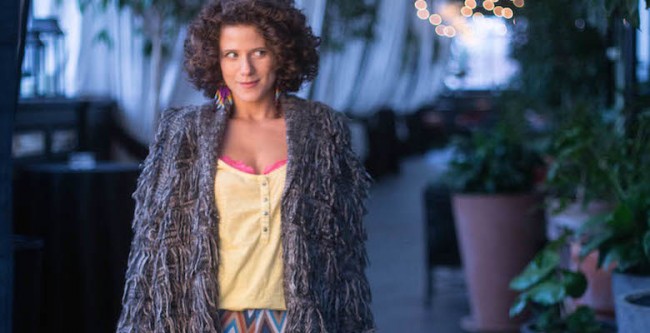 (Photo : Anna Webber)
Poised to be a star: Cyrille Amie

Blogarrhea: It's so beautiful the way you sing in Spanish. You also sing in English on your originals and in French when you sing the Edith Piaf song "T'es Beau tu Sais," a gorgeous tune totally under the radar. Everybody always chooses "La Vie en Rose" or "Non, je ne Regrette Rien." What led you to this particular song?

CA: Exactly that! I knew I wanted to do a Piaf classic but not one that's been recorded over and over again. Plus, the lyrics had to be important to me personally so [guitarist] Michael [Valeanu] really dug into her repertoire-not only Piaf but other classic French singers like Charles Aznavour. He knew this Piaf song, rediscovered it, and it's really incredible. It's a woman telling her man how handsome he is and she can feel it when she walks down the street or when she touches his face. Then, only at the end of the song, do you realize that she's blind.

Blogarrhea: Plus you made it into a bit of a Mambo.

Blogarrhea: I like how you stretch the boundaries. So cool. Each of the 13 Let's Get Lost songs are so different. Yet it all comes together as a cohesive whole.

CA: Yes that is how we wanted it. It was our work to instrumentally be [wide-rangingly] different. Not many bands have that gypsy guitar and the electric guitar. So a big part of the work as a band was to create a sound that was ours no matter what song we would play, Dominican, French, American standard or original, it had to have our print on it.

Blogarrhea: The fact that there's no piano gives the mix a little more space, makes it more open and airy, so the two guitars can interact with each other. Piano tends to fill in the open spaces.

Blogarrhea: Very nicely done! I'm just so smitten with this. Did you really busk throughout Europe with just your guitar on street corners for small change?

CA: Yeah! And not just with guitar. You see, when I came to America, I went to SUNY Purchase College in New York and my classmates who became my really good friends backpacked with me in Europe, and to busk in the summer streets was such an experience! It was their first time abroad. One of them was Matt Simons who is on Let's Get Lost as my duet partner for "Each Day." He played sax on my last album and was in my first band. We sang together on the sidewalks of Spain and Italy. How amazing he's now a huge pop star in Europe.

Blogarrhea: I love how you walked off the set of the French version of American Idol after becoming a finalist.

CA: I just felt that I had so much more to learn about music. I did not want to sign any big contracts that would make me not choose what I want to sing. I had just been falling in love with jazz and I didn't want to go into the pop industry right away. So I left for New York to study.

CA: It's difficult to feel anything when you're in the middle of it. [Life and music] is so much about everything else than that so when that comes around, it's like a bonus. I did so many competitions because I like to challenge myself. I also like to follow instructions. It was my voice, yes, but it was on things that I ordinarily wouldn't be singing. It was also to see how I could be in a very stressful environment. That's what I call fun. And I think that because I was actually enjoying myself, that's why I won. It felt natural.

Blogarrhea: You not only cover Sondheim but he personally cast you opposite Bernadette Peters in an "Encore Special Presentation" at Manhattan's City Center in 2013.

CA: Yes. That's why I recorded his song. I sang it at the show.

Blogarrhea: How did you get along with Peters?

CA: She was great to me. It was so much fun. As the only two females, we were always together. She even gave me shampoo tips. In the show, I was the girl and she was the woman.

Blogarrhea: So what's in your near future?

CA: After the release of the album, we will have a party at Greene Space in New York on February 16 before we start touring in the U.S. and Europe. Hopefully, we will sell a lot of CDs.

Blogarrhea: You're going to win a Grammy and become a big superstar. That's what I think is going to happen because if everybody loves you the way I love you...

CA: [laughing] You're sweet. You made my day with all your love...

BLOGARRHEA: Brilliant New Documentary, 'Sinatra: All Or Nothing At All,' is American History