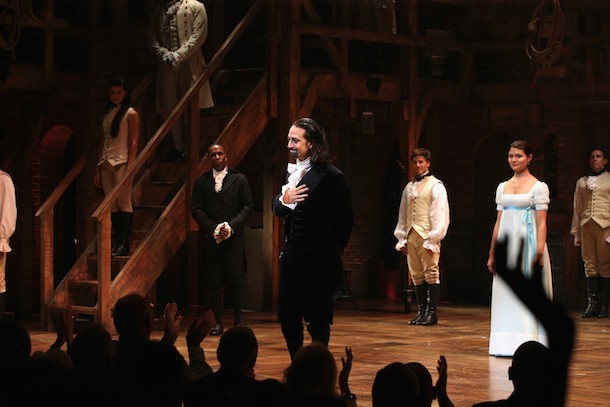 Hamilton, the hit musical by mastermind Lin Manuel Miranda, has seen tremendous growth since it opened in July, as well as rave reviews from nearly every corner of the media. Recently, Hamilton earned a larger accolade when the production dethroned The Lion King for the No. 1 spot for largest gross revenue during a week, breaking nearly a year-long streak at the top for the production. Although the top spot takeover is a big deal for the production, a few "outside" factors may have swayed Broadway's gross revenue for that period.

Hamilton took hold of the No. 1 spot for the week ending on January 17, marking a $100,000+ hold on The Lion King. According to a recent report from Forbes, the production's top slot takeover can be attributed mainly to an extra performance added to their normal eight-performance week. The extra show was paid for by the Democratic Party, and had a post-show speech given by President Barack Obama. Including that show, sales for the tuner were up 16.74% from the week prior. For months, Hamilton has comfortably rested in the No. 2-No. 5 position on the chart, and has been grossing over the one-million dollar mark for months as well.

Recently, Broadway took a hit from Winter Storm Jonas, which forced Hamilton, along with most of Broadway, to cut their productions down to a six-show week. Hamilton grossed $1,304,793 in the modified week, while The Lion King grossed $1,063,040. Although Hamilton's surge to the top makes sense given the production's huge demand, the takeover may be largely due to the storm. It's important to note that The Lion King is housed in a bigger theater and has an average gross potential of over $300,000 higher than Hamilton.

The secondary ticket market often works as a great indicator when it comes to production popularity, although it is not always the largest determining factor. For example, Hamilton tickets on the resale market are currently averaging $670, and are by far, the priciest of all productions currently on the Great White Way, according to data provided by TiqIQ. Throughout all of the show's dates in 2015, secondary tickets averaged an impressive $758. The Lion King, on the other hand, currently averages $296 on the secondary market and has stayed consistent in price.

Boost in Broadway Ticket Sales This Holiday Season: 'The Lion King' Remains No. 1 While 'The Elephant Man' and 'The River' Recoup