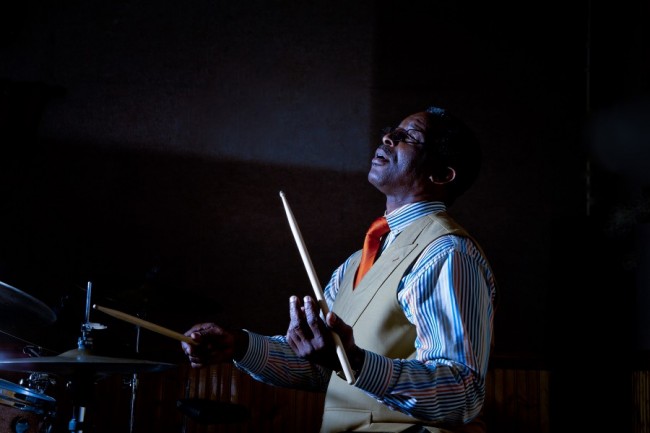 Herlin Riley stands on the shoulders of giants. He comes from a long line of New Orleans drummers who are so deeply entrenched in the pocket and in the tradition, that their swinging styles have set a standard. For Riley's Mack Avenue Records debut after drumming in the bands of no less than Wynton Marsalis and Ahmad Jamal, he's taken a New Direction.

Not that you cannot tell how strong the Crescent City flavor still hovers above this dynamite CD (especially on the closing "Tootie Ma" which encapsulates the abject joyousness of Mardi Gras day), but Riley, despite being a native son, can veer Afro-Cuban like Chano Pozo [1915-1948] or Dizzy Gillespie [1917-1993]. His obvious influence, though, is fellow drummer Art Blakey [1919-1990], who, with his Jazz Messengers, mentored and nurtured many a young star prior to their stardom. Riley also uses young musicians and the results are stellar.

Dig that crazy piano by Emmet Cohen on "Herlin's Hurdle," almost as if Riley was daring Cohen to be great. Ditto for Haitian saxophonist Godwin Louis on the danceable (if you're double-jointed) "Big Banana." "Hiccup Smooth" is yet another wild joy-ride. "A Spring Fantasy" is the calm in-between storms."Connection To Congo Square" is deeply felt for it is here, in this small square within Louis Armstrong Park of the Treme neighborhood, where, in 1817, after 93 years of not being allowed to, that the Mayor let incoming slaves legally sing and dance for the first time.