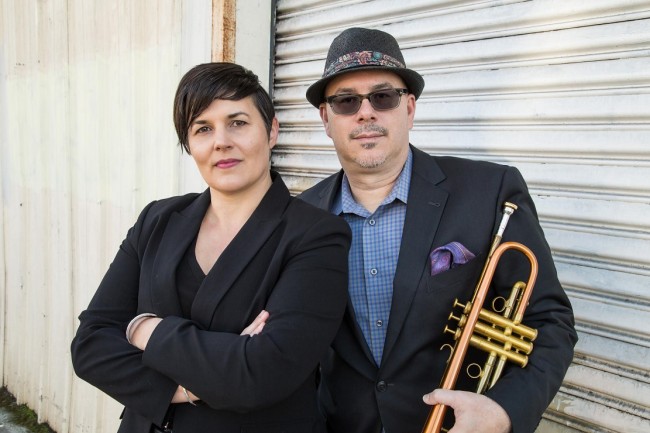 Trumpeter/Composer/Producer/Music Executive Nick Phillips channels his inner Chet Baker in dreamy duets with singer/songwriter/pianist Jenny Maybee on their self-released new Haiku CD. Backed by only bass, it's an 11-track rarity of pristine playing, beautiful vocals and original compositions in a kind of fragile junkie brilliance. Let me explain.

Billie Holiday and Chet Baker, to name but two, are jazz legends whose music you could close your eyes to and nod out blissfully in a deep groove without actually having to use heroin (as they did). Haiku is in the same league. Her voice...his trumpet...her piano...their songs...Jenny and Nick make musical love on Haiku like Lady Day and Lester Young. It's a total swoon.

Mention this to Nick Phillips, who also happens to be an award-winning producer, and a Vice President at Concord Music Group, and he comes clean that he too is addicted. "Yeah," he surprisingly admits, "I am totally addicted to coffee. As per the Chet Baker comparison, I'm fine with it. There's no denying his influence. I favor a warm tone and an expressive lyrical way of playing with space so that the music can breathe, and I can respond to the players I'm playing with and they can respond to me. Those were Chet's strengths too. I do have a slightly different vocabulary, though, in terms of what I do melodically and harmonically."

But does he approach the music any differently than he does in his day job?

"It's all music whether producing someone else, playing on another artist's project, collaborating or leading my own project. In all of those situations, I try to bring my many years of experience. Hey, I've enjoyed the kind of A-List job where I get to listen to music for a large portion of the day. I've been digesting a whole lot of jazz throughout the years that I've internalized in both my playing and producing. One feeds the other. My discipline as a jazz trumpet player definitely informs my role as a producer and, I might add, even as a music industry businessman. Everything overlaps. When I co-produced Haiku with Jenny, all of my producing experience came into play, as well as the knowledge I've gleaned about the music business itself about how to release a record, get it properly marketed, and ultimately sold. Even as a trumpeter, my history of a record company executive comes into play. I don't check my knowledge at the door."

Nick Phillips comes fully formed upon entering the room. The business part of the music business may not be as much fun for him, but as he says, "I deal with it for the sake of the project to give it its best shot." His Moment To Moment debut was mostly standards. Haiku is mostly original, with vocals and no drums. Moment To Moment had drums and no vocals.

Phillips picks up the story. "Audiophile engineer Cookie Morenco had originally asked me to record her way with no isolation of instruments, no headphones, and nothing amplified. Not even Jenny's voice. It's just Jenny, myself and bassist Paul Eastburn playing so we all can hear each other. Had there been drums, it would have been a lot harder to capture that sound live. So we did a more stripped-down recording. Cookie was working with some crazy high-resolution format called Quad-Rate DSD. So the recording itself was very high-edge but the approach was totally old-school. We went into her studio and knocked this thing out in an afternoon. No editing. No auto-tune. No punching in parts later." That, in itself, is rare these days. But, as Nick says, "when you remove the possibility to pitch-correct or punch in a flubbed note, it's just pure playing...period. There's something liberating about that."

"We met at the Songwriter Conference in September of 2014. There were these private clusters of talent who signed up to perform for 20 minutes to industry people. I was one of the judges along with Tamara Beatty, the vocal coach of The Voice TV show. Jenny had shown up to showcase. She walks in and the first thing she says is, "if it's okay with you two, I'd just like to play piano before I sing to get a feel for the room." So she sits down at the piano and the next thing I hear is this completely improvised creative, compelling solo jazz piano with elements of Chick Corea and McCoy Tyner but not like anything I'd ever heard. She finally sings and I hear that beautiful voice on her own compositions. I talked to her afterwards and asked her if she was into writing a song with me. Shortly thereafter, she came to one of my shows, and we made a date to get together. When we did, I brought some things I started, she brought hers, and we started work-shopping each other's tunes that resulted in a very simpatico musical relationship. At first, we were just going to record a demo in an effort to get some gigs, but then, as I said, Cookie approached me to record."

A perfect storm of circumstances! Only two of the 11 tracks are covers (Thelonious Monk's "Blue Monk" and Bobby Troup's "The Meaning Of The Blues"). The confluence of these originals, the languid Phillips style, the poly-rhythmic pianistics of Maybee, and the totally organic groove, makes one want to, yeah, just nod out in an appreciative swoon.

BLOGARRHEA: A Life Lost on the Upper West Side of NYC and a Goodbye to My Friend Pam