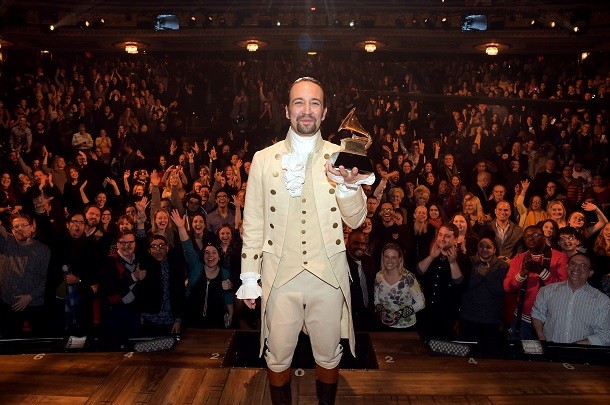 Already a Broadway legend, Lin-Manuel Miranda and his seminal production Hamilton have now been awarded the Edward M. Kennedy Prize for Drama Inspired by American History.

As its name suggests, the honor goes to performances rooted in American history and its story.

The musical tells the story of Alexander Hamilton, one of our country's founding fathers. The prize, now in its fourth year, awards recipients $100,000. Last year, the prize was awarded to Father Comes Home from the Wars, Parts 1, 2 & 3 by Suzan-Lori Parks.

Hamilton was among an elite of selected plays and musicals dedicated to history. Also in the running were An Octoroon by Branden Jacobs-Jenkins, Indecent by Paula Vogel, Sweat by Lynn Nottage and Vietgone by Qui Nguyen. The winner was determined by a jury of playwrights, writers and scholars.

The Kennedy Prize is just the latest in a long line of accolades for Hamilton, the hottest and hardest-to-get ticket on Broadway. It's also won a a $50,000 grant from the George Washington Book Prize, a MacArthur Genius award for Mr. Miranda, an Obie for best new American theatre work and a Grammy for best musical theater album.

Despite soaring tickets prices on the secondary market and shows sold out months in advance, Mr. Miranda continues to give out tickets for nominal sums, and has even sells $10 tickets to uNew York area public schooi students .

Check out a preview from the performance below.