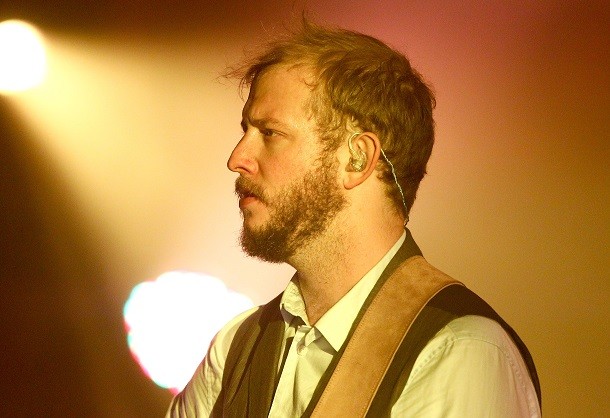 Bon Iver's Justin Vernon has an eclectic resume of musical endeavors--including production on and contributing vocals to Kanye West's Yeezus. Now, Vernon, along with S. Carey, have released a cover track of Bryce Dessner's "Music for Wood and Strings."

Described as a "translucent remake" the cover takes on the Vernon hue of instrumentation, similar to Phil Spector's "wall-of-sound." The new version of the song, too, was included in the announcement video for the 2016 Eaux Claires Music & Arts Festival in Wisconsin.

In a mission statement conjured by Mr. Vernon, he remarks of the festival:

"Our mission for Eaux Claires is to create a deeply meaningful experience of togetherness and expression. We feel like everyone, whether interested in the fashion of popularized music or not, will be entertained, moved, and surprised by our festival. The inaugural edition proved that Eaux Claires can inspire and generate power beyond just the big names. We believe that every single artist will bring an equal amount of importance and uniqueness to the culture we've created. We're excited to grow in that spirt and push ourselves forward every year, to grow with our audience and celebrate art in all of its forms."

The new version of the tune features new vocals and lyrics from S. Carey and provides an air of curiosity in the sound--with several different uses of instruments that sound similar to vocals.

Initially, "Music for Wood and Strings" was a collaborative effort between Dessner and Classicalite darlings Sō Percussion but has since been breathed new life by the Vernon-Carey duo.

But don't take our word for it. Preview the new version of the song below and, in the meantime, be sure to stay up-to-date on what's happening with the Wisconsin festival.

Bryce Dessner, The National and the Cincinnati Symphony Perform at 2015 MusicNOW Festival