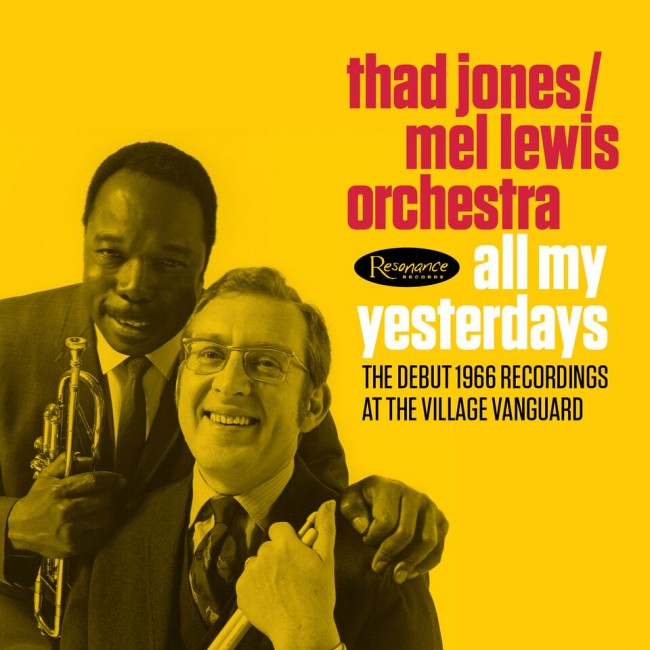 50 years on, 'The Debut 1966 Recordings at the Village Vanguard' are now ready to be experienced properly. (Photo : courtesy Resonance Records)

All My Yesterdays by the Thad Jones/Mel Lewis Orchestra, sub-titled The Debut 1966 Recordings at The Village Vanguard, is a 2-CD set of jazz history celebrating a half-century of Monday night performances by one of the-if not the-greatest big bands ever. Kudos to Resonance Records for finally doing it right after a 2000 bootleg of such. Right means every single living member of the Orchestra getting royalties. It also means bringing back the original feel of what can only be described as electric shock therapy of what exactly went down on the two nights in question: February 7 and March 21 of 1966.

Resonance President George Klabin was still a teenager when he set up his microphones to record for posterity both nights. The buzz was palpable. People were dying to hear what Thad Jones had up his sleeve ever since he left the employ of Count Basie. Trumpeter Jones had been featured soloist, arranger and composer for Basie from 1954-1963. But when Basie didn't use many of his most progressive charts, Jones left, took his arrangements with him and became The In-Demand Studio Cat of them all. When he hooked up with drummer Mel Lewis to rehearse these charts at Phil Ramone's A&R Studios, the chemistry was such that the Orchestra was born. They got Hank Jones on piano, Pepper Adams and Joe Farrell on saxes, Bob Brookmeyer on trombone and a New York City A-List of jazzers for the fateful opening night you hear here.

The result was instantaneous. The whooping, hollering, shock and awe at these crazy, way-out charts was off-the-charts, as they say. Thad Jones arranged and composed 13 of the 17 tunes. It was an instant hit and Village Vanguard owner Max Gordon invited them back every Monday night. It became a Greenwich Village institution. For over 50 years-under only three names-be it the Thad Jones/Mel Lewis Orchestra, The Mel Lewis Orchestra (upon the demise of Jones in 1986) or The Vanguard Jazz Orchestra (which continues to this day), this lion roars.