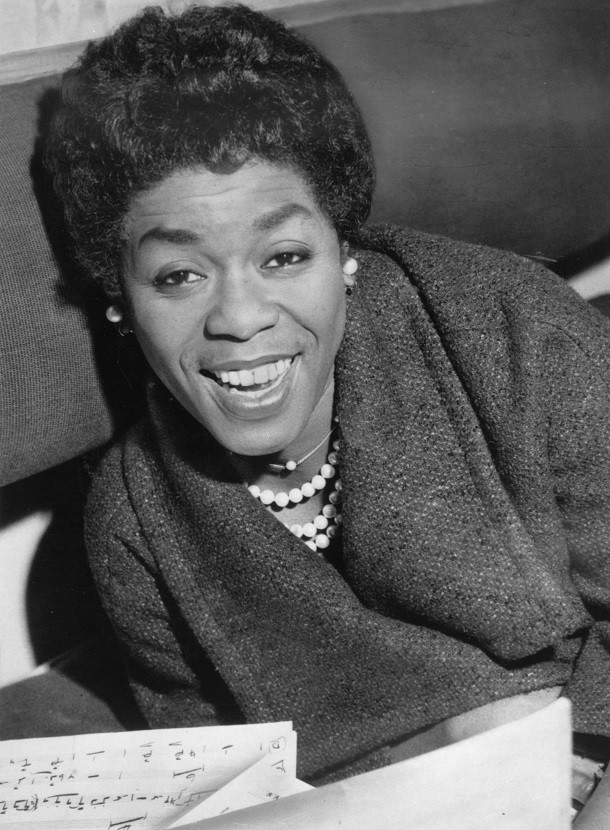 22nd January 1960: American jazz singer and pianist Sarah Lois Vaughan (1924 - 1990), also known as Sassy or The Divine One. She is currently in Britain for a performance at the Royal Albert Hall.
(Photo : Terry Disney/Central Press/Getty Images)

Iconic jazz singer Sarah Vaughan will be given a most resounding tribute in her hometown of Newark, N.J. this month. It's been announced the U.S. Postal Service is honoring the timeless artist with a forever stamp portraying the singer in an oil painting.

The artwork is based on a 1955 photograph of the singer taken by Hugh Bell. The cover side of the image features a larger version of the stamp, a resume of the singer's most popular performed songs as well as the Music Icons logo.

It's been noted that Bart Forbes was the artist along with Ethel Kessler, the artistic director overseeing the project.

If you aren't in the know, Ms. Vaughan was born in Newark and resided on Brunswick Street. She attended the East Side High School and later transferred to Newark Arts High School. Her most attributed songs are "Misty," "Lullaby of Birdland" and "My Funny Valentine." Vaughan died in 1990 in Hidden Hills, Calif. at age 66.

The New York Times wrote in their obituary on the late-singer:

"Where more idiosyncratic jazz artists like Billie Holiday excelled at interpretation, Miss Vaughan was a contralto who gloried in displaying the distinctive instrumental qualities of a voice that had a comfortable three-octave range and was marked by a voluptuous, heavy vibrato. Known for her dazzling vocal leaps and swoops, she was equally adept at be-bop improvisation and singing theater songs with a symphony orchestra. Among the singers of her generation, only Ella Fitzgerald enjoyed comparable stature."

The forever stamp is a magnificent way to honor the singer and help immortalize her through a collectible feature. Be sure to keep an eye out for the stamp as it's released during the month of March.

For now, though, keep familiar with the singer in a video below.