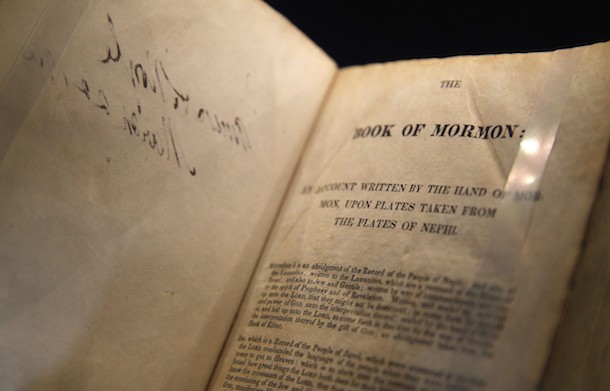 An 1830, first edition of the Mormon scripture, 'Book of Mormon' is displayed at the Church of Jesus Christ of Latter-Day Saints Church History Library, part of the 'Foundation of Faith' exhibit on September 8, 2014 in Salt Lake City, Utah. Many of the documents are on pubic display together for the first time. (Photo : George Frey/Getty Images)

The comment section of most pages on the Internet is a void for the distressed. It may seem that some of the most impassioned manifestos have been conceived in the footer of a web article. And now The Book of Mormon's listing on Amazon has turned into an open forum for all ideas--whatever that means--to be shared.

The text, formally entitled The Book of Mormon: Another Testament of Jesus Christ, is the standing bible for the Church of Latter Day Saints. Its contents, if you haven't heard the story by now, were translated from gold plates engraved in ancient Egyptian by an American named Joseph Smith in 1827.

Believe it or not, this story isn't about the validity of what the book says, but rather what others are saying about it.

A deluge of scathing comments isn't uncommon for this kind of material, but the rapidity in which the comments came was something even major news outlets reported.

The Guardian posted comment-by-comment coverage, citing both believers and non-believers.

One reads, "WARNING: May cause drowsiness and occasional eye-rolling. Go watch the musical instead."

Another, a five-star fan, said "it was translated by the Gift and Power of God, and is the record of a people who are a branch of the tribe of Israel who had Prophets in their day who preached about Christ. Read it and pray about its contents."

The war wages on, still, underneath the book's listing so keep an eye out as the battle ensues. Perhaps Mark Twain's 1872 review, in which he called the Book of Mormon "chloroform in print," is the most outstanding of them all.

If you wish not to purchase the text, maybe bide your time over the brawl with a preview of Broadway's Book of Mormon below.

CORRECTION: This article initially stated that Joseph Smith translated the gold plates in Utah in 1827, which has been removed.

2014 Olivier Awards: Book Of Mormon Among Big Winners, Les Miserables Gets Yet Another Gong