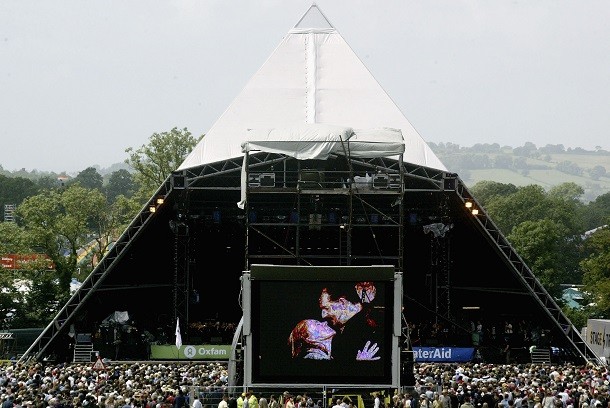 Members of the English National Opera perform Wagner's Ride of the Valkyrie, on the Pyramid Stage during the third and final day of the Glastonbury Festival 2004 at Worthy Farm, Pilton on June 27, 2004 in Somerset, England. The festival spanned over 3 days. (Photo : Matt Cardy/Getty Images)

Known as one of the world's premiere countertenors, Costanzo began a weeks-long transformation at the behest of the show's director, Phelim McDremott. McDermott, as Costanzo put it, had persuaded the countertenor to go beyond just wearing a bald cap and only semi-committing to the role.

Instead, it's about the psychology of steeping oneself into the performance entirely. McDermott cited Richard Croft in the production for Satyagraha at the Met and ENO, in which Croft played Gandhi. When he immersed himself, meaning "shaved his head," he found a sense of oneness with his character.

In an interview at WQXR, Costanzo recanted:

"(Director) Phelim McDermott said a few things to me on the first day of rehearsals, 'First of all I think we want you to do this naked scene; we'd like you to shave your head and to be sort of Egyptian the way that they were thought to be; and we want you to wax your entire body.' I thought, 'Oh gosh,' and I said, 'Well what about a bald cap? Wouldn't that look just as good?' He said it's not really so much how good it looks, because we can make everything look great from the stage, it's about the psychology. And he told me that when Richard Croft was doing the production for Satyagraha at the Met and the ENO, the day he shaved his head to play Gandhi it really transformed the performance."

Of course, it wasn't just donning a bald cap that immersed Costanzo in the persona. He also had to wax from head-to-toe and then actually perform, in front of a live audience. He also reflected on the entire experience as "liberating," noting that in order to show skin there has to be a sense of release--at least for Costanzo.

Reviews of the performance have heralded Glass and Costanzo, marking the countertenor's performance to be a great success.

Check out what Philip Glass' opera is all about in a video below.