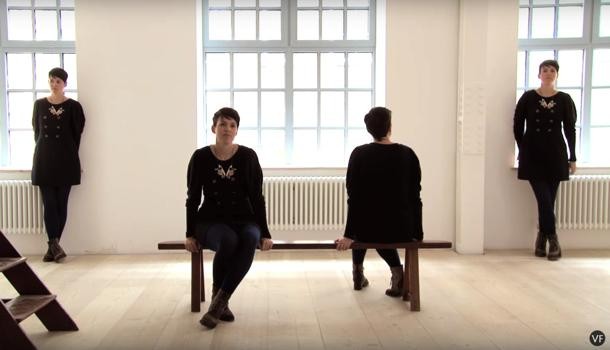 Classical composers don't always remain classical composers. Some embrace multiple projects; others ditch the medium entirely for something more down-to-earth.  Neither column can perfectly sum up the experience of composer Anna Meredith regarding her sudden departure from the classical medium and her foray into world of electronica and pop music -- a genre which, at 37, she admitted was foreign territory. A former in-house composer with the BBC Scottish Symphony Orchestra and with Sinfonia ViVA, her electronic work (previewed in her 2012/2013 EPs) has culminated in the March 4th release of her debut album Varmints (under Moshi Moshi Records).

According to The Guardian, Meredith had "grown frustrated by classical's constraints", referring to the labor that classical composers must endure for the relatively brief premieres they enjoy, and also of the scathing (and potentially career-shattering) criticism they face upon the release of every work. The odds of a piece falling flat to a glazed audience lies in the face of every aspiring composer.  Anna Meredith craved something different. Of her choice to explore new areas, she went on to say, “I don’t want to write music that people are enduring just to get to the Elgar in the second half."

To counter, Meredith has embarked on a new path that has been called "maximalist", a touch more pop-friendly, and still as retaining all the hallmarks of a seasoned composer. A classically trained clarinetist, her album Varmints is rich with an affinity for woodwinds and brass -- often triumphant, manic, and at times, cataclysmic.

Curiously, this transition comes at a time of relative success for Anna Meredith (winner of the 2010 Paul Hamlyn Award for Composers and a commissioned composer for the 'Ten Pieces' project at BBC Proms). She was even recently commissioned to write a piece for the Kronos Quartet's 'Fifty for the Future' project: The Kronos Learning Repertoire. As part of a project to make fifty unique 21st Century scores available to the public, at no cost, composers both young and old are participating to be a part of this unique pantheon -- among them are Philip Glass, Laurie Anderson, and the younger Anna Meredith. Her piece was recently announced to be a part of the second year of 'Fifty for the Future'.

Still, an interview with DIY revealed that Meredith has derived more enjoyment from her electronica leanings. Proud of her ambition, the transition seemed to pay off in the release of Varmints.  By retaining her composers' training, but indulging in the pop & electronica communities, Anna Meredith has opened herself up to a new realm of diverse crowds and venues. To The Guardian, she described the experience of playing in front of a club full of people who are largely eager, curious, and ready to move -- quite the contrast from the stoic crowd of a classical recital hall. The marriage of her genre-fusing sensibilities in Varmints has been lauded by many critical outlets, including Pitchfork... but don't take their word for it; give yourself a listen in the Spotify link above, and hear Anna Meredith personally describe her transition below.  (She's still very much a classical composer, of course.)