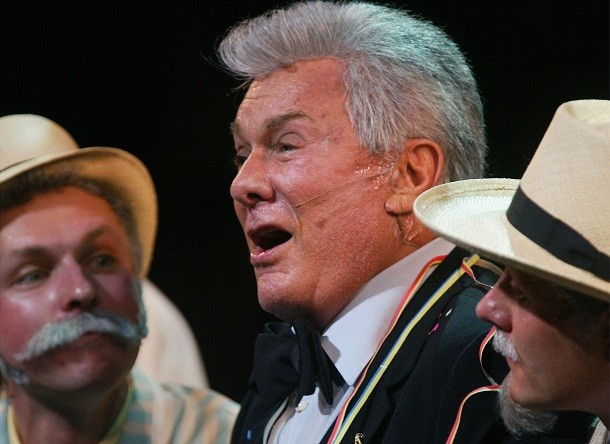 Actor Tony Curtis performs as the multi-millionaire, Osgood Fielding III, in the musical 'Some Like it Hot' at Wolf Trap, August 27, 2002, in Vienna, Virginia. (Photo : Mark Wilson/Getty Images)

The opera and classical world has embraced the new age. In continuing its presence on the Internet, the Wolf Trap Opera has taken to streaming old productions on its website. The production chosen for the debut is a summer staging of John Corigliano's The Ghosts of Versailles.

The video is first in a long line of others that will mark a new initiative by the company. In this new era, the Wolf Trap will feature a number of its upcoming productions on its website for streaming, which will also include its shed opera series in The Barns this summer.

On the new initiative, senior director of the Wolf Trap and its classical programming Kim Pensinger Witman said:

"We didn't want to do a live broadcast, because that would tax what we are able to do well. We're not the Met. We wanted to have a chance to get the product into its best possible form before putting it out there.

"...Six months is wonderfully generous. These are young artists. You want to showcase their best work right now. But the fact that it has an expiration date, and then you move on to the next project, is completely consistent with who we are."

And that ideology is what will help young and budding actors and performers advance their career. Instead of trying to compete with rival companies who have a more recognizable clientele, the new initiative can help generate a wider audience for small productions.

In the long run this will help shed light on the small-scale stagings as they flesh out their productions in an environment more conducive to spreading the word instead of continuing an already-made career.

Wolf Trap will also partner with WETA, who will broadcast an audio recording of The Marriage of Figaro after the Met Opera season ends; which will air on May 14.

A great initiative for a great company, the availability of these performances is a great leap forward.

Check out a preview from the Wolf Trap below for the time being.