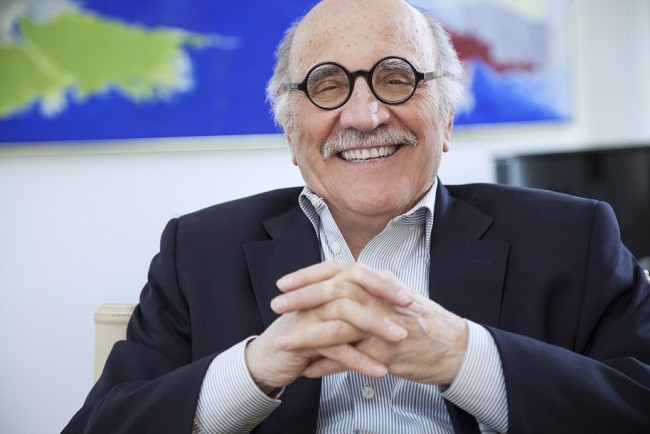 On June 24, producer Tommy LiPuma was honored in his hometown of Cleveland by Diana Krall, Al Jarreau, Dr. John and Leon Russell, amid of host of superstars like Elvis Costello, Randy Newman, Herb Alpert, Barbra Streisand, Willie Nelson and Sir Paul McCartney who sent in their congratulations on video. Not to rest on his laurels, the 80-year old has just finished producing a hot jazz up'n'comer, Dominick Farinacci, on Mack Avenue Records (see imbedded video below). Blogarrhea spoke to the legendary session man just days prior to being honored.

Blogarrhea: Nervous about Friday?
Tommy LiPuma: I wish it was over. The amount of friends and folks who will be there makes it all rather exciting for me. It should be great.

Blogarrhea: I'm sure you'll remember it for the rest of your life.
TL: Yeah, what's left of my life.

Blogarrhea: So five Grammy Awards, 36 Grammy nominations, wow, but I gotta ask, what was it like to produce Streisand? She's notoriously strong-willed.
TL: She was great. I had absolutely no problems with her. She's a perfectionist to the nth degree, and has a memory like no one else I've ever worked with. She can remember every phrase, every note, it's incredible. I had a ball.

Blogarrhea: In '73, you produced her classic The Way We Were album. Then, in 2009, you co-produced with Diana Krall her Love Is The Answer album. The question is: did Streisand actually let you produce her?
TL: Oh yeah, she takes direction and advice but, sure, she knows what she wants in the studio. I found her a total delight.

Blogarrhea: Paul McCartney?
TL: One of the nicest most thoughtful gentlemen I've ever had the pleasure of working with. It was a gas. What can I tell you? We're still friends, and speak every so often. God, he's out on the road so much, it's amazing. Talk about action at his age! He's got to be nearing 75. [Paul turned 74 June 18.] But you wouldn't know it by the way he looks or acts. He uses the gym of a hotel I stay at. I can tell you this guy is in outrageous shape.

Blogarrhea: Miles Davis? You're not going to tell me how nice he was, are you?
TL: Well, I must say, maybe I was one of the fortunate few. I worked with Miles later in his life. Maybe he mellowed. Yes, I found him to be absolutely fantastic. I produced Tutu with Marcus Miller in 1986. Marcus wrote most of the things. When Miles and I first got together, I said, "look, I'd like to use Marcus to work with me on this because he's a great writer and he's been with you before." Miles said, "Yeah, that's cool. I love Marcus." The first thing we cut was the opening title track and that gave us the path for the rest of the album. Miles was probably the funniest individual I have ever worked with. I'd be on the phone with him and tears would come out of my eyes because I was laughing so hard. He was a very funny guy.

Blogarrhea: Can you give us an example?
TL: The guitar player was playing an awful lot of notes during rehearsal. Miles walks up to him and says, "man, I'm gonna send your ass to Notes Anonymous."

Blogarrhea: Did you see Don Cheadle's Miles Ahead movie?
TL: I didn't get any further than the previews to know I wouldn't want to see it. I think they did Miles a disservice. Cheadle nailed him, yes, but they made Miles out to be a thug. I was close to Miles for six years. I never saw him with or even talk about guns. In this thing, he's shooting through walls of the Columbia offices. That's crazy! None of that stuff ever happened. It's almost as if they tried to make Miles Davis into an action hero.