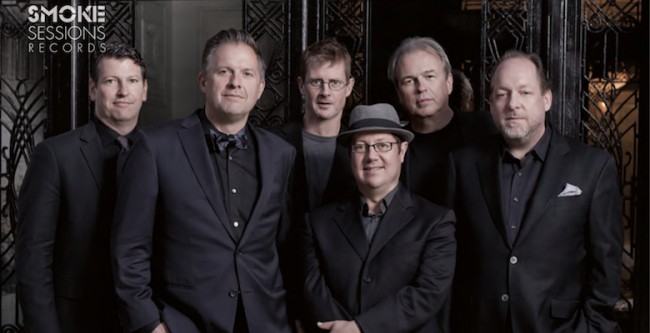 It's 'The Third Decade' for One For All. (Photo : courtesy Smoke Sessions Records)

As One for All, this most prestigious of all-star sextets, enters into The Third Decade (Smoke Sessions Records) of its illustrious career, all the while remaining viable leaders in their own right, their mission, on this, their 16th album, first in five years, and first to feature compositions by all six members, stays the same: preserving swing.

If you put together all the artists that tenor sax man Eric Alexander, trumpeter Jim Rotondi, trombonist Steve Davis, pianist David Hazeltine, bassist John Webber and drummer Joe Farnsworth played with over the last 40 years or so, it would almost fill a phone book. The name of the band, One for All, is also the name of the final album by Art Blakey & His Jazz Messengers and that's no coincidence. Giants such as Blakey and Horace Silver led two of the greatest sextets in jazz history.

'Bone man Davis wrote opener "Easy" while sitting in the traffic of one busy Hartford, Connecticut rush hour as a meditation for all those beleaguered commuters. His "Daylight" features some nifty cymbal dancing by drummer Farnsworth who chips in with the closing "Hey Stevie D," a total grooooove for bandmate Davis.

Then there's the seriously haunting "Ghost Ride" by saxophonist Alexander which features his friend and neighbor Dave Wakefield on French Horn. His other tune, "Frenzy," wiggles with nervous energy and serves as the flip side to "Ghost Ride"'s romantic sentimentality.

Hazeltine's odes to pianist Buddy Montgomery [1930-2009] (the younger brother of the legendary guitarist Wes Montgomery [1923-1968]) and drummer "Killer" Ray Appleton both swing in a classic sense. Recorded live-in-studio in New York City, producer Paul Stache made sure to get every single hi-hat ping and bass pluck with a trebly attention-to-detail that makes the aforementioned shine on like a crazy diamond. Thus, it not only sounds good, it feels good.

Orrin Evans Searches for 'The Evolution of Oneself,' Smoke Sessions Records (REVIEW)