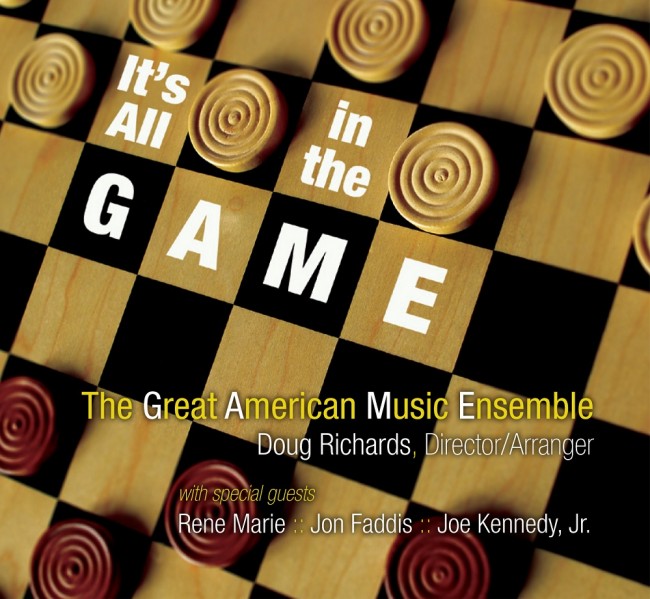 'It's All in the GAME' by The Great American Music Ensemble (Photo : courtesy Jazzed Media)

Doug Richards is one of the most respected composers/arrangers you've never heard of, so much so that a tribute CD, Bugles Over Zagreb: The Music of Doug Richards by Rex Richardson, came out in 2014, before Richards himself ever recorded under his own name. Richards put The Great American Music Ensemble (GAME) together in the mid-'80s, toured throughout the '90s, and in 2001, recorded It's All In The Game. Yet due to lack of label interest, it sat on the shelf unheard despite daring soloists like trumpeter Jon Faddis, violinist Joe Kennedy, Jr. [1923-2004] and vocalist Rene Marie.

Sure, touring jazz big bands are pretty much a thing of the past. The cost for folks like Ellington, Basie, Herman, Kenton and the like far outweighed the interest thereof. So today, a smart guy like Wynton Marsalis, instead of touring with his orchestra, conducts under the auspices of Lincoln Center in Manhattan so folks come to him rather than the other way around.

It's All In The Game is a super-sized gumbo of righteous proportions. GAME doesn't just recreate classic charts. It explodes them. A swing classic like "In The Mood" that the Glenn Miller Orchestra first brought to towns nationwide while he was the best-selling recording artist from 1939-1943, is seemingly injected with meth and comes out frenetic, speed-zip bug-eyed wild. That same sensibility infuses Gershwin ("Clap Yo' Hands"), Hoagy Carmichael ("Stardust"), Cole Porter ("I Am Loved"), Fats Waller ("Ain't Misbehavin'") and 10 more including Charlie Parker ("Bird Blues" is actually four songs connected with Parker mashed up and struttin' its stuff like at Mardi Gras).

Doug Richards has been content to create great music behind the scenes, so to speak (check out his world music conducting in the embedded video). You want big band action? You got it: sax (13), clarinet (7), bassoon (2), flute (2), trumpet (5), flugelhorn (4), trombone (3), euphonium, piano (2), bass, drums, percussion, vocals and violin all compete for your attention. Now imagine touring with 13 saxophones.