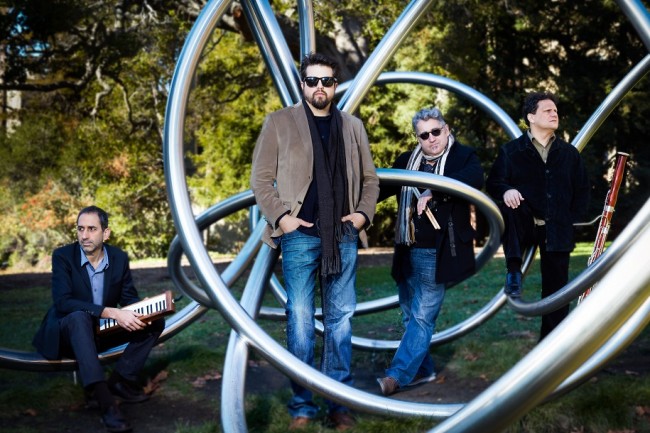 The Jeff Denson might confound you on 'Concentric Circles.' (Photo : Ted Killian)

Jeff Denson, 39, might be too brilliant for his own good. The music he writes on Concentric Circles (Ridgeway Records) is so difficult to play -- and oftentimes to listen to -- that one must clear away the detritus of everyday life to make room for it in your brain's ear.

His bass playing -- especially bowed -- is gorgeous. His nine acoustic compositions and one stirring slice of Ellingtonia ("I Got It Bad"), though, are so Monkishly hard to fathom, that concentration is required to understand the full scope of what he's laying down. He's a child of Mingus and also furthers pioneering aesthetics by the likes of Jaco and Bootsy. The sounds he hears in his head required a quartet of his double-bass and vocals plus piano (Dan Zemelman), drums (Alan Hall) and -- get ready! -- bassoon. It is Paul Hanson's bassoon that gives Concentric Circles its sound.

Opening with "City Life On Trains" that approximates the sound of the New York subways, by the time of "A Thought That Lingers," one has to stop what one is doing to marvel at the intricacy, the intimacy and the circuitous path this arrangement traverses, what with its opening theme, atonal middle, and restatement of the theme. I'm hard-pressed to even think of another improvising bassoonist.

He sings on "Wishing Well" and sings without words on "Once the Door Opens" which is only voice, bass and bassoon. The bass solo that serves as an intro to the Duke cover is right out of "Haitian Fight Song" by Charles Mingus. Pianist Zemelman has a classical background so if portions of these ...Circles sound like chamber music composed by some guy from a few hundred years ago, you wouldn't be far off.

Born in Virginia, raised in DC, Denson, last year, played with the legendary Lee Konitz. As a San Francisco fixture, he's led trios, quartets and combos such as Electreo and Minsarah. The three gents with him here figured prominently in his other bands, thus the name of this beguiling project.

Enter the 'Arctic' with Ratatet on Ridgeway Records [REVIEW]