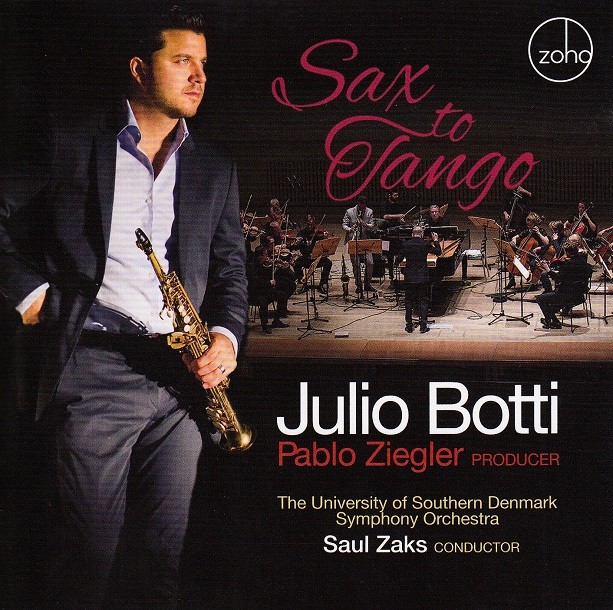 'Sax To Tango': Could Julio Botti be looking at his second Grammy? (Photo : courtesy ZOHO)

Sax To Tango (Zoho Music) is the second time around for Argentine saxophonist Julio Botti and arranger/pianist/composer/producer Pablo Ziegler-who also served as Music Director-on this plush lush project that serves as the follow-up to their 2013 Grammy Award-winning Tango Nostalgias. Add Saul Zaks conducting The University of Southern Denmark Symphony Orchestra on nine by Astor Piazzola [1921-1992], three by Ziegler and a traditional waltz, and you've got one sumptuous romantic hour-plus.

Dig This: In hundreds of reviews I've written for this site in the last 13 months, I 've never asked the following. Dude, check out the clip below. I guaran-damn-tee you you couldn't possibly spend the 1:05 it will take any better. Botti's sax sails, I mean, he flies, in the face of the symphony. Did I mention it's 1:05?

Every song is a highlight. When Grace Jones recorded her "I've Seen That Face Before" 1981 disco hit, who knew it was adapted from Piazolla's "Libertango" which closes this party? Then there's "La Rayuela" which takes the fastest kind of tango, known as milonga, and uses it as a base for a celebration of the children's game of hopscotch where Brazilian kids jump on certain squares in milonga double- and triple-time beat.

Piazolla wrote "Oblivion" for Bertolucci's 1984 Henry IV. It has been called one of his most beautiful melodies. He wrote "Fuga y Misterio" for an operetta in a style strongly influenced by Johann Sebastian Bach [1685-1750], and he wrote "Anos de Soledad" ("Years of Solitude") for sax man Gerry Mulligan [1927-1996] on their 1974 Summit collaboration.

There's a mysterious Buenos Aires creek somewhere deep in the fog where the rotted-out hulks of old abandoned cargo ships rule the night. The elders say these ships were the ones that Italian immigrants used to enter Argentina from Europe. That's why "Nieblas del Riachuelo" sounds so haunted. It is also said that this particular barrio is the 'hood where traditional tango music first originated.

Between the stunning sax solos, the symphonic sweet sweep of the orchestra and the complex arrangements on music by The Tango King himself, Piazzolla, I think another Grammy awaits.