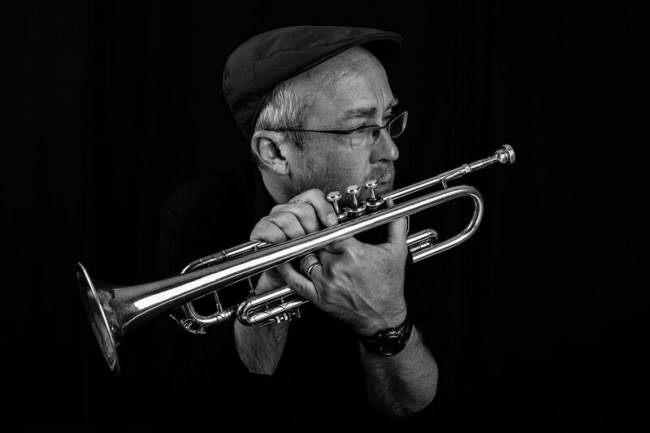 We have a winner! A wildly uncompromising synthesis of electronica, jazz and soundtrack, trumpeter/band leader/composer Dave Douglas has entered some Dark Territory here (Greenleaf Music). It's the follow-up to last year's aptly-named High Risk. Now, though, he's not only balancing on a high wire of expectations, he's dancing in the dark.

Self-produced and recorded in the creative borough of Brooklyn, NY, which is rapidly starting to rival Manhattan as a music capitol, Dark Territory seethes with unrestrained human emotion despite it being a creation of the EDM of Shigeto, the electric and synth bass of Jonathan Maron and the acoustic and electric drums of Mark Guiliana.

Shigeto provides the snap, crackle and pop. His effects are as irresistibly delicious as late-night cereal. The title comes from the book Dark Territory: The Secret History of Cyber War by Fred Kaplan. The trumpet of Douglas wafts above the fray like Miles. Davis invented fusion. Will Dark Territory be the CD that launches Electro-Jazz?

There's also no getting around the fact that bassist/synthesist Maron has his own agenda and that's to this project's credit. Maron moves the music with a kinetic force that makes leader Douglas sound that much better. He does the same thing in his own Groove Collective. Plus, with drummer Mark Guiliana on board, you just know things are going to sizzle. It's Guiliana's rocket-propelled drumming that fueled David Bowie's Blackstar goodbye.

But it's the trumpeter's show. He thought of this concept in May of 2014 at a Town Hall confab featuring esoteric duo and solo improvisational performances by the likes of Nels Cline, Daedelus, Petra Haden, Wadada Leo Smith and Allen Toussaint. Douglas was on the bill paired with Shigeto. The two struck up a backstage friendship and voila! a concept was born. Let us hope like-minded futurists take it and run with it.