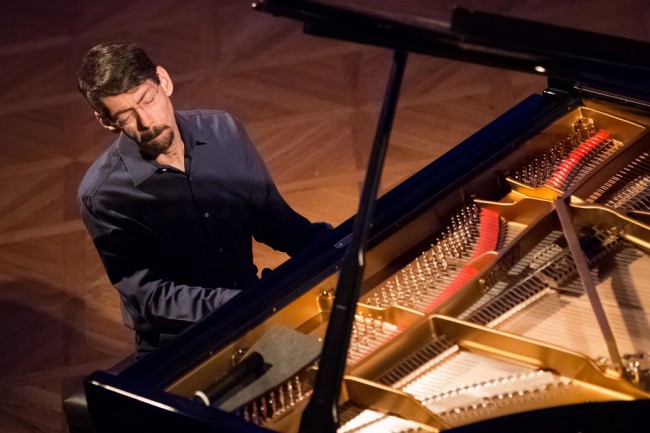 What? You say you've never heard of pianist/composer/bandleader Fred Hersch? Just walk into the storied bowels of New York City's Village Vanguard and there on the wall, next to framed signed pictures of John Coltrane and Charles Mingus, is a picture under glass of Fred Hersch. Sunday Night at the Vanguard (Palmetto) is the place to be. Hersch's Floating was one of 2014's best. What Hersch can do with drummer Eric McPherson and bassist John Hebert is very special.

Opening with Richard Rodgers' 1949 music for "A Cockeyed Optimist" from South Pacific, Hersch then rewrites Irving Berlin's 1950 "The Best Thing for You (Would Be Me)" into "The Optimum Thing." It starts fast, goes faster and ends up fastest, a furious gallop. (Oftentimes, the playful Hersch would perform the song backwards by starting it at a gallop and ending up simply fast.) The effect, either way, shows the elasticity of the band.

Not above borrowing from the Beatles, his version of "For No One" has him plinking out the McCartney melody that Janis Siegel of Manhattan Transfer originally sang on their 1994 duet project, Slow Hot Wind. You can dance to "Everybody's Song But My Own," a joyous romp wherein Hersch sounds like he has 30 fingers. Written by a former bandmate,trumpeter Kenny Wheeler [1930-2014], here it's a celebratory elegy for his friend (it's also the title tune of their 2013 CD together).

Hersch loves pencils. In fact, he wrote a piece for his favorite pencil, a "Blackwing Palomino," which also happened to be the favorite pencil of Tennessee Williams. His friend Ravi Coltrane is also an admitted pencil geek and suggested Hersch do so. It turns out to be the CD's highlight.

"Calligram" is for another friend, French pianist Benoit Delbecq, with whom Hersch recorded Fun House in 2013. He stretches out "The Peacocks" by Jimmy Rowles [1918-1996] into 10:15 like a carnival mirror of different concave and convex images. Thelonious Monk's "We See" and a solo "Valentine" spot end the program.

Can a traditional piano/bass/drums trio still thrill our jaded ear? You bet it can.