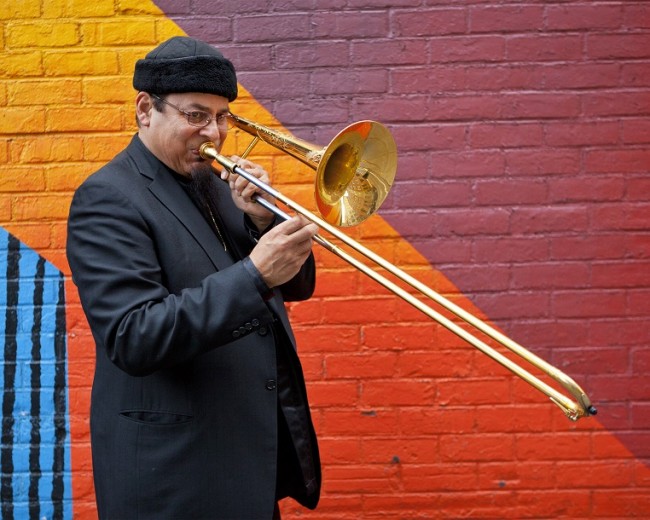 Trombonist/Composer Steve Turre is not only creating Colors for the Masters (Smoke Sessions Records)...but colors with the masters. Yeah, this session must have smoked alright! One of the greatest living trombone men, Steve Turre, has, as his core band, none other than bassist Ron Carter, pianist Kenny Barron and drummer Jimmy Cobb, masters all, on five originals and five standards.

Turre even called his old bandmate from Art Blakey's Jazz Messengers, saxophonist Javon Jackson, for four of the 10 tracks. On the closer, Turre plays a conch shell while guest percussionist Cyro Baptista gives Antonio Carlos Jobim's "Corcovado" some added oomph. Carter's majestic bass solo on Wayne Shorter's "United,"-and all the action hovering before and after the solo on this fast-faster-fastest romp-will make your head spin.

Listen to Barron's piano solo carefully on Turre's elegant "Quietude" ballad. It's a lesson in not wasting a note but getting your point across brilliantly. Turre wrote the "Taylor Made" opener in honor of both Blakey and the big-band charts of Ray Charles under the direction of David "Fathead" Newman. While Monk's "Reflections" feature the delicate brushwork of drummer Cobb, JJ Johnson's "Coffee Pot" is a wild swingfest. Turre's Coltrane tribute, "JoCo Blue" has sax man Jackson emulating that particular master. (Bassist Carter even gets his own tribute on Turre's "Mellow D for RC.") Drummer Cobb shines throughout. Don't forget, this is the man who manned the drums on possibly the greatest jazz album of all-time, Kind Of Blue (1959) by Miles Davis.

A veteran of the bands of Rahsaan Roland Kirk and Saturday Night Live (for 30 years), it was only in The Thad Jones/Mel Lewis Orchestra where he met Quentin "Butter" Jackson. Butter, decades earlier, had replaced "Tricky" Sam Nanton in the Ellington Orchestra and showed the young Turre how to use a plunger for his trombone. For this we're all grateful. He uses it for dramatic effect on the Johnny Mathis hit "When Sunny Gets Blue." And as far as that conch seashell is concerned, Turre calls it "the most ancient of horns" as you blow into it to produce a woodwind sound. Try it yourself next time you go to the beach.