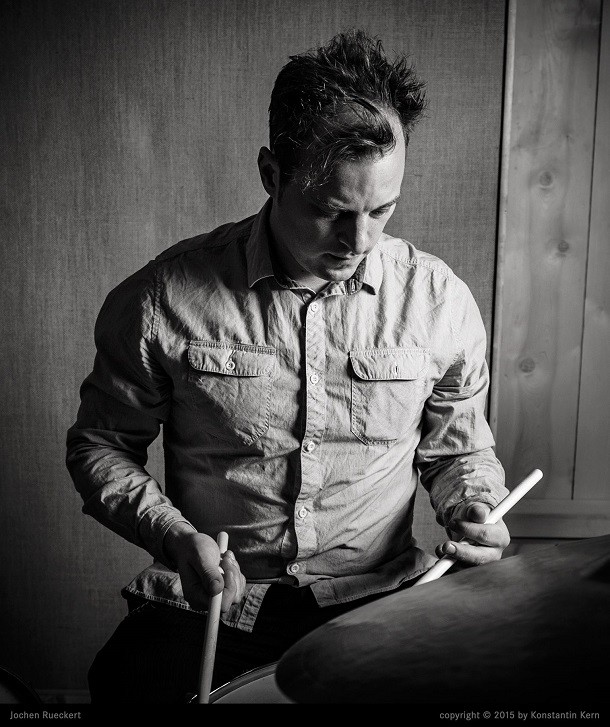 Jochen Rueckert is on a Charm Offensive for his second Pirouet release. Having immigrated to 1990s New York City from his native Germany, he's got some top-notch New Yorkers behind him to fuse classical music from India with jazz to create a whole new sub-genre. Blending raga and South Asian micro-tonal aspects (where instead of 12 notes in a scale, there could be 32 or even 64) with Western harmonics opens up whole new avenues of exploration and this quartet does Ruekert's eight complex originals proud. The quartet refined its chops for the new music herein by touring with Robert Glaspar (see embedded video).

His 2011 Somewhere Meeting Nobody debut had German jazz critics in a tizzy. This one should send them over the top. Take the incredible 8:43 "5-Hydroxytryptamine," for instance. Here, a relaxed samba groove is interrupted by what can only be described as horror movie soundtrack music. The composer, in the liner notes, admits he wrote half of it while on anti-depressants and the other half while tapering off his meds.

Mike Moreno's guitar, Mark Turner's tenor sax and Orlando Le Fleming's Jaco-styled bass are the perfect foil for Rueckert's poly-rhythmic drumming and strikingly outrageous compositions. "Aussenposition" is a quick 2:13 with no improvisation whatsoever. It contains three incessant notes hammered home in an approximation of Germany's Frankfurt Airport and the bus one has to endure to get to its terminals. The composer obviously wants you to feel his discomfort.

But it's the three Indian tracks that command one's attention. "Parasitosis," "Purring Excellence" and the closing title track take up over 20 combined minutes and really take the listener into another sphere altogether. Carnatic music is a classical-folk strain indigenous to Southern India played on a veena (an ancient stringed instrument that's a cross between a zither, lute and harp). Guitarist Moreno plays an electric modernized cousin to the veena on these three tracks while drummer Rueckert plays a pakhavaj (a two-headed barrel-shaped Indian drum). The result is a freewheeling worldbeat jazz groove that gets under your skin immediately and remains there to the point where you'll want to hear this invigorating sound over and over again. Playful yet profound, Rueckert prods and pokes, pushes and pushes, leading one to wonder what he's possibly going to come up with next time.

Spend 'Every Hour of the Light and Dark' with Euro Sax Man Christian Weidner, Pirouet [REVIEW]