Come Take a 'Cosmic Adventure' (Sunnyside) with Scott Tixier. You'll be Glad You Did! [REVIEW] 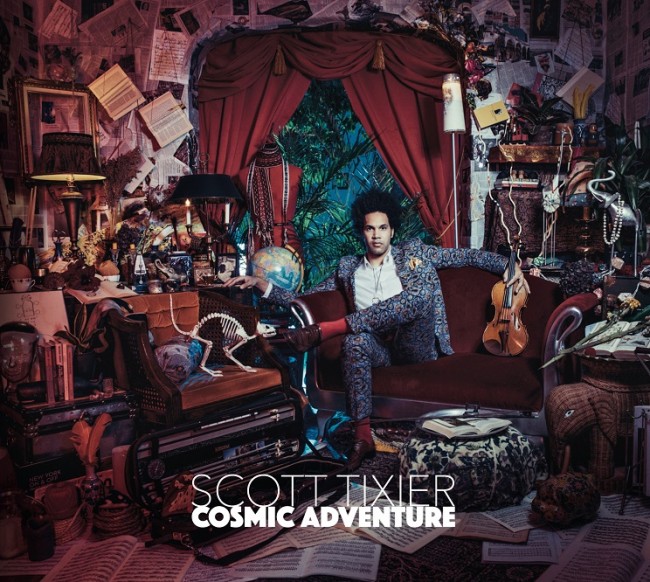 Scott Tixier, 30, from Montreuil, France, plays the violin. His talented quintet consists of harmonica, piano, bass and drums with guests on congas and sax. His Sunnyside Records release takes one on a Cosmic Adventure. He's a rather mystical cat, reminds me, in fact, of a jazz version of Lenny Kravitz, in his all-encompassing musical worldview and even in his look. It's been four years since his debut as a leader. He's taken his time for a reason.

The legendary three-fingered gypsy guitarist Django Reinhardt [1910-1953] wrote "Troublant Bolero" for his brilliant violinist partner Stephane Grappelli [1908-1997] when they were both in Quintette du Hot Club de France together from 1934 to 1948. Tixier takes the premise and runs with it, the same way he takes the most famous song from the Erroll Garner songbook ("Misty") and almost arrogantly makes it his own. This is no easy doing! Who does this kid think he is?

If Tixier had been born a few generations earlier, he probably would've found himself in San Francisco making inroads with that town's 1960s pioneers. He has a wonderful zip to his fiddle that decries genre specifics. His originals are spark-worthy, setting off little explosions of group interplay amid sizzling soloing. Highlights include the closing "Beam Me Up To Mars" and "Mr. Tix" by French mouth harp player Yvonnick Prene who positively wails throughout, even engaging in some violin-harp conversations with Tixier bolstered by a smokin' rhythm section of pianist Glenn Zaleski, bassist Luques Curtis and drummer Justin Brown.

This is perfect music for those who claim to love new sound but say they can't get into jazz. Know anyone like that? If so, it's your duty to send them on a Cosmic Adventure.