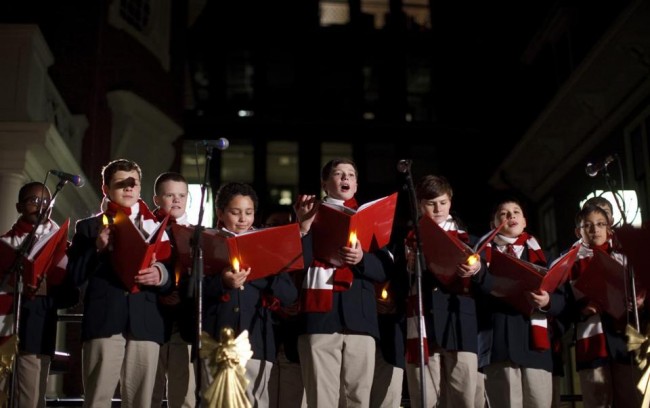 St. Paul’s Choir School, located in Cambridge, Mass., is the sole Roman Catholic boys’ choir school in America, catering to boys grades 4 through 8. Coming from humble beginnings, the choir had no intention of gaining international success; however, their undeniable collective talents lead to a deal with Decca Records.

Since releasing Christmas in Harvard Square, the Boys of St. Paul’s Choir School have earned critical praise, while maintaining a steady spot in the Top 5 on Billboard’s Classical chart (for nine straight weeks, no less).

As Classic FM says: “This is no ordinary choir--they sing with a purity and commitment which is missing on other recordings.”

The album was produced by Grammy Award-winner Blanton Alspaugh.

Founded in 1963, The Boys of St. Paul’s Choir School have performed with the Boston Symphony Orchestra and Leonard Bernstein, on the legendary stage of Carnegie Hall, in St. Peter’s Square at the Vatican for Pope Francis, in addition to countless Boston Red Sox and Celtics games.

Future television events include upcoming profiles on CBS "This Morning" and a special Christmas Eve gig for "Good Morning America."

On the radio, the Choir will soon be heard on SiriusXM’s Symphony Hall (Dec. 21-23), as well as American Public Media’s "Performance Today."

And to top it all off, the Boys are also the stars of their very own PBS special, “Christmas in Harvard Square.”

So, Classicalites, hang up your stockings, make some hot chocolate and cozy up on the couch to this exclusive video of The Boys of Saint Paul’s Choir School performing “O Come All Ye Faithful.”