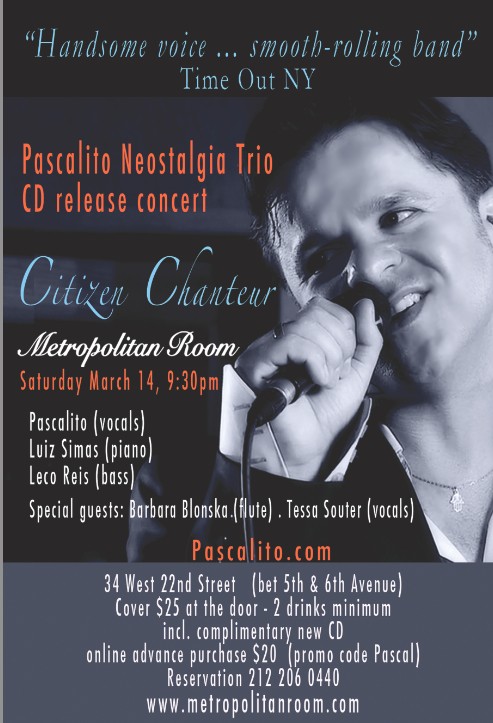 Pascalito will perform in a CD release concert at the Metropolitan Room. (Photo : Press Photo)

Pascalito’s first five-track EP, Forbidden Colours, was completed at the Bennett Studios just before the renowned facility closed. The second disc, Citizen Chanteur Live in NYC, features a full show of 14 songs that was recorded and filmed at the intimate midtown Manhattan venue, Metropolitan Room.

According a press release, Pascalito (Pascal Sabattier) was born in Paris to a musical family of North African and Spanish Jewish descent. He showcases an eclectic and bilingual repertoire filled with inspired compositions, imaginative covers and heartfelt interpretations in both English and French.

Pascalito has produced and released two prior studio albums. Le Blues d’Orphée brought the artist national exposure when original selections from the debut CD were licensed and featured in the popular cable network series Burn Notice, Damages and NCIS Los Angeles. His world pop jazz crossover sophomore release, Neostalgia, further established his reputation as both a singer and a songwriter.

The show will feature Pascalito on vocals, Simas on piano, Leco Reis on bass with special guests Tessa Souter for vocals and Barbara Blonska on flute.

The double CD release concert with take place on March 14 at The Metropolitan Room. Click here for more information about this event of to purchase tickets to the performance.