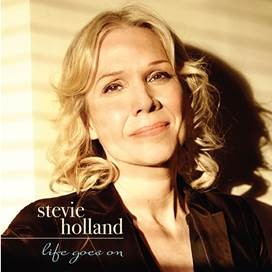 'Life Goes On' for Stevie Holland, and we are glad. (Photo : Doreen D'Agostino)

For her fifth CD, Life Goes On, elegant vocalist Stevie Holland transcends what might have been a maudlin cocktail-hour affair by being in total service to each song. No idiosyncratic dips and swirls. No garish 'American Idol' vibrato or making one-syllable words into eight. Holland is refreshingly natural plus she maintains a dynamic ability to dredge every last ounce of warmth and meaning from James Taylor's "Another Grey Morning," Harold Arlen and Johnny Mercer's "Out Of This World," Albert Hammond and Hal David's "99 Miles From L.A.," Stephen Sondheim's "Not While I'm Around and even "Tea For Two" and "Skylark" (which features a mid-song swing-break). It's almost as if she's dusting off the cobwebs of time.

She also co-writes her own sophisticated originals with producer/husband, Gary William Friedman. Backed sympathetically by piano/bass/drums augmented by star trumpeter, Nicholas Payton, on three tracks and a string quartet on two, the 10 songs fly by on gossamer wings. It's a thoroughly delightful 40 minutes.

Holland's one-woman 2013 off-Broadway show Love Linda: The Life Of Mrs. Cole Porter had her singing those merry old Cole songs as if they were new, adding life to them in the process. And that-exactly-is her talent: everything old is new again in the hands of this native New Yorker. Be it pop or jazz, chanteuse-extraordinaire Stevie Holland has upped the cabaret culture ante.