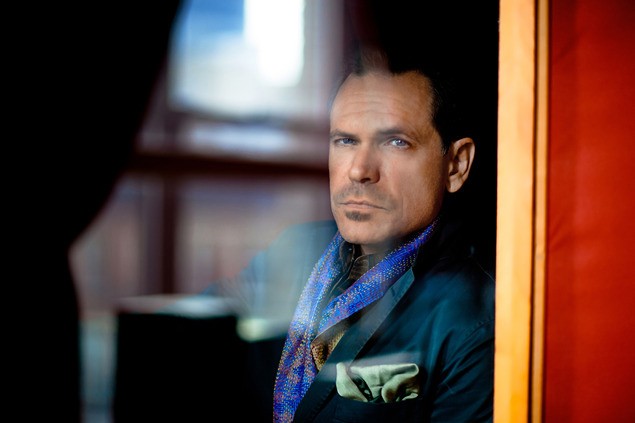 Every single one of singer Kurt Elling's 10 previous albums has been nominated for a Grammy Award (he won in 2009). Now comes album #11, Passion World, five years in the making, a world music potpourri of intriguing images, melodies, sadness and surprise.

Augmenting his usual quintet are a few friends he's picked up while globetrotting. Cuban trumpeter Arturo Sandoval plays like Miles on a melody he wrote to which Elling has added lyrics. "Bonita Cuba" is haunting. Arturo low-moans it through his mute missing his homeland while Elling plays it straight to sing his friend's blues ("I go insane but I live in music/I play right through the pain and pour songs on my bruises"). Known for writing lyrics to previously existing jazz favorites, he works his magic here on Pat Metheny's "After The Door." His cover of U2's "Where The Streets Have No Name" adds gravitas, and, speaking of such, how about a cabaret version of "Nicht Wandle, Mein Licht (Liebeslieder Walzer Op. 52, No. 17)" by Johannes Brahms? It works.

Passion World takes us on a musical journey to Brazil, Ireland, Germany, Spain, Scotland, Cuba, the U.S. and Iceland. His honeyed vocals contain just a hint of vibrato at the end of his lines no matter what language he uses to sing. Musically, graceful jazz is juxtaposed with the ethereal soundscapes of the Scottish National Jazz Orchestra and German trumpeter, Till Bronner.

There's no acrobatic vocalese, no scat, no overly dramatic glissandos or American Idol-styled desperation to be liked. Elling is a singer's singer. He's been there, done that. Here, he glides and swoops with ease but remains in service to the song. In fact, some of the material is so esoteric and foreign; it's similar to lunar terrain with zero gravity. Unearthly? Mysterious? Yes and yes. Much of Passion World is its own odd universe--oftentimes like walking underwater--yet Elling, to his credit, fits the bill of whatever country's music he's interpreting. Edith Piaf's "La Vie En Rose," for instance, acts as the bread of a big-band music sandwich with an Elling original served up in-between as the meat of the matter. It's thoroughly unique. In fact, he took a Wynton Marsalis solo of a different song, stuck it in the middle of "La Vie En Rose," added lyrics and came back to Piaf to wrap it up with ketchup and a pickle. It's an eight-minute delicatessen of scrumptious delight.