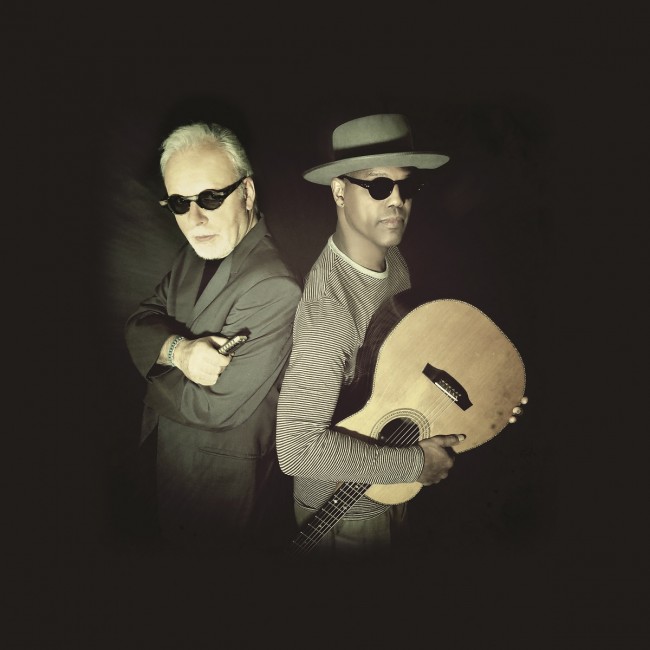 Eric Bibb comes from a long line of roots heroes like Taj Mahal and Keb Mo who are bound to keep American blues and folk alive for future generations. JJ Milteau is a French harmonica player. Together, with full band, they perform 11 live and five studio interpretations of the legendary Lead Belly [1888-1949], a giant of a man, born Huddie Ledbetter in Louisiana. The release is titled Lead Belly's Gold and is released on Stony Plain.

Songs like "Midnight Special," "Pick A Bale Of Cotton," "Goodnight Irene," "Rock Island Line," "Swing Low Sweet Chariot," "On A Monday," "The House Of The Rising Sun," "Bourgeois Blues" (a song Lead Belly wrote about Washington DC) and "Bring A Little Water, Sylvie" have all been covered hundreds of times by artists in numerous genres. It was this one man though, who sang his way to freedom after being imprisoned for a murder he committed in self-defense, who originally popularized these songs, songs that have now been so fully ingrained in the American lexicon that it's hard to fathom they all came from him. (Bibb's own "Swimmin' In A River Of Songs" and "Chauffeur Blues," written in the style of Lead Belly, also graces this set.)

"What I hear now, when I listen to Lead Belly's recordings and YouTube clips, and what I must have sensed as a boy, is the man's personal power and independence," Bibb writes in the liner notes. "His sound made it clear that he was his own man. The fatalism and resignation that I heard later in the voices of many of my prewar blues heroes was missing in Lead Belly. He was way ahead of his time. The path he cut through a world that conspired to rob him of his humanity, dignity and manhood was a personal triumph that will inspire for generations to come."

Bibb sings these songs and makes them vital as if they were new. The folk music community has always been at odds as to which songs Lead Belly actually wrote and which songs he covered. The man was a human jukebox, an incredible 12-string guitar player, a folksy humorist and a born entertainer.

The live cuts were performed at the famed Parisian jazz club, The Sunset. Talk about songs that stand the test of time! For previous generations, it was artists like Creedence Clearwater Revival, Johnny Rivers, Pete Seeger and Woody Guthrie who kept this "Gold" alive. Lead Belly's Gold, thanks to Eric Bibb and JJ Milteau, continues that tradition...and that's how it should be.

'An American In Paris' is a Hit in France, Comes to Broadway in the Spring