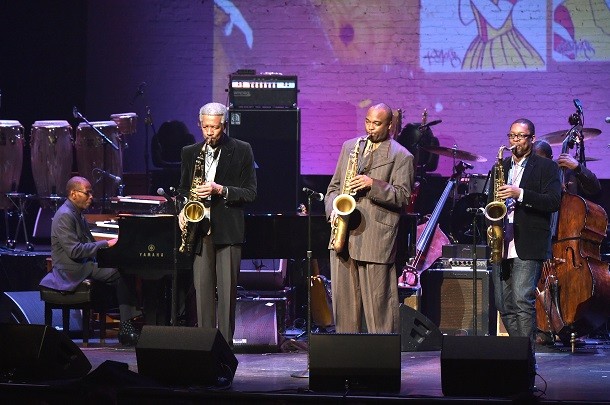 George Cables, Billy Harper and Ravi Coltrane perform at The Jazz Foundation of America Presents the 14th Annual 'A Great Night in Harlem' Gala Concert to Benefit Their Jazz Musicians Emergency Fund Saving Jazz, Blues and R & B....One Musician at a Time at The Apollo Theater on October 22, 2015 in New York City. (Photo by Theo Wargo/Getty Images for The Jazz Foundation of America)

Recently, the Monterey Jazz Festival announced a 17 city, 28 concert U.S. tour featuring a band composed of some of modern jazz's most lauded players. The band for this tour includes musical director Gerald Clayton on piano, Ravi Coltrane on tenor and soprano saxophones, Nicholas Payton on trumpet and others to help round out the group.

This is the fourth tour for the festival. Its previous runs in 2008, 2010 and 2013 tours all similarly featured an all-star band of musicians. This year kicks off at UC Santa Barbara on January 14 and travels through Arkansas, Arizona, California, Illinois, Maryland, Massachusetts, New Jersey, New York, Texas and Virginia.

The tour concludes with two shows at City Winery in Chicago on March 13. Among the highlights of the tour is a five day, ten show stop at the famous Birdland club in New York City from Feb. 2 through 6.

If you aren't in the know, the Monterey Jazz Festival is one of the world's longest running jazz festivals. It started in 1958 and throughout the years has seen jazz luminaries such as Ravi Coltrane's father John Coltrane, Miles Davis, and Duke Ellington grace its stage.

While countless jazz musicians have played the festival, there has never been any reticence in showcasing young artists. In recent years, budding stars such as Esperanza Spalding, Trombone Shorty and Soulive have performed at the festival.

Along with its position as an integral part of the jazz world, the festival has also served as inspiration for the legendary 1967 Monterey Pop Festival, which jump started the careers of Jimi Hendrix and Janis Joplin.

Until then, peep and earlier version of the festival below and catch it in a city near you next year.