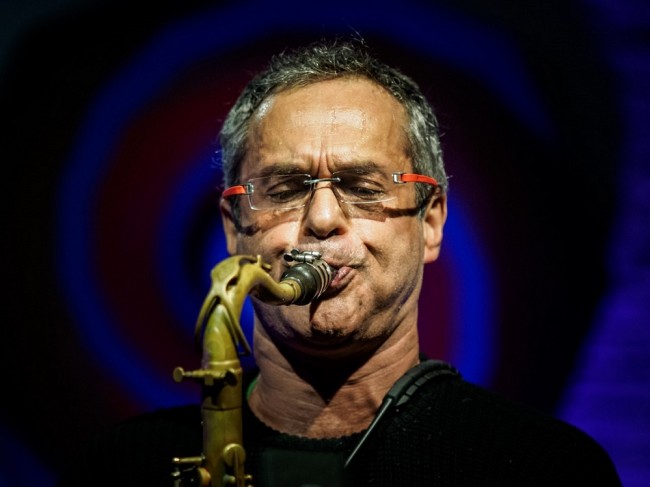 He's a painter and a prophet. This man named Ivo, complete with synesthesia, comes from Brazil to blow your mind with six CDs this year alone and 25 CDs over the last five years. Call it Saxarrhea. He goes into the studio with no rehearsal, no written music in hand and barely an idea of where the music will take him. Yet he is one of South America's most respected artists both on a canvas and on a stage. Just no sheet music, please. When the phone rang, it was, indeed, Ivo Perelman, 54, on the line from Sao Paulo. The following is an edited transcript of what turned out to be a totally delightful conversation.

Blogarrhea: So amazingly prolific! Is your recorded output due to the fact that you spontaneously compose by blowing your soul through your horn within a certain set of parameters with no forethought or rehearsal?

Ivo Perelman: Very interesting first question and I will try to explain in my broken English. I have been in Brazil for the last 10 weeks and haven't spoken much English at all so you'll have to excuse me. You lose it if you don't use it, y'know. Recording spontaneously is very easy and very hard at the same time. My music does not require pre-conceived notions or even meetings with the musicians, but it took me a lifetime to get to that point. To be strong enough, to feel confident enough to walk into a studio situation and still be able to tell a story that is true to the moment. Therefore, every moment should be different. I try to maximize that process by preparing for each series of CDs in a different way, much like an actor prepares for a roll, collecting information about their character. I pretend I'm an actor focusing my attention each and every time I record so the outcome of that methodology will yield a different CD. Oftentimes I practice music from certain eras or certain instrument families. I try to always challenge myself with more evolved methods. This way, not only I am kept stimulated by what I do, but it justifies the number of recordings I put out. Nobody wants a CD that sounds like the last one! So I make an extra effort. As long as I have it in me, I will keep trying. I don't know how much longer, nor how frequent, but right now it's working.

Blogarrhea: The only precedent that comes to mind for you is Coltrane. Was he an influence?

IP: Yes. Albert Ayler too. Less for the content than for the spirit and the openness. You can't be another 'Trane or Ayler because they were just too original, impervious to emulation. It would sound wrong. I can only lead my life and try to be honest to my own process. But they both certainly motivated me, especially when I was younger.

Blogarrhea: You get more sound out of a sax than anyone I ever heard, including those two aforementioned gentlemen. Your little squeeks, squawks, blips, beeps and grunts, I dare say, is probably more than the inventor of the saxophone himself, Adolphe Sax, ever even thought of! You've taken it to the extreme. Do you ever think of softening it for more accessibility in an effort to garner more listeners?

IP: That kind of thinking comes up for every artist. Do I play a melody so that people can whistle to it and thousands more CDs can be sold? From the getgo, I decided to eliminate that tempting detour. I have to be strong. I have to do what I believe is right for me. I think more of years and years in the future when I'm not around anymore and what kind of legacy I will leave. It's a mission for all the people who will listen to this instrument in the future. Yeah, I have lofty goals and I think grand! It's difficult when you are so open, free and expressive and, like you say, let all those sounds come into my scene. I play them and I don't shy away from them. I try to make them musical although they are not necessarily so. Sure, that can be a problem commercially.

Blogarrhea: I understand you have the ability to experience a phenomenon known as synesthesia, the ability to hear color, taste music and see aromas. That's science-fiction super-hero stuff, no?

IP: I paint. I draw. I can hear my work on a canvas internally. The outcome of one of my paintings is, indeed, rhythmically motivated. I can't not do that because I am a musician so what you see on a canvas is musical. I can hear it. I know I am not playing music when I am painting but it certainly feels so. Any in-breeding of the senses is, indeed, synesthesia. It actually can also be a very disturbing phenomena. It can get to be pathological. Some people suffer immensely and have to be sedated with treatments. It can be a serious dysfunction of the cerebellum part of the brain. Luckily, for me, I just have a tantalizing smattering form of it, just enough to use it aesthetically and artistically. Others will be walking down the street, see a bus, and hear massive amounts of debilitating matter, so much so that they cannot ever leave their house.

Blogarrhea: If it could be harnessed, though, it's like a super-power.

IP: It happens when I perform. Sounds oftentimes become visual entities to me. When I paint, I hear the visuals.

Blogarrhea: You have three new CDs out. Some of the sounds you make on your duo album with pianist Matthew Shipp, Complimentary Colors, seem to be from outer space. What's the difference in scope between that CD and Butterfly Whispers with Shipp and drummer Walt Dickey?

IP: My first saxophone teacher in Los Angeles told me, "sound is everything. You will be remembered or forgotten because of your sound, and not what lines you play." That is so true. What do you remember most about Stan Getz? His sound! Paul Desmond? His sound! Charlie Parker? Same thing. When I'm paying duo with Matt, it's a direct dialogue. No intrusion. It necessitates a different response from the both of us. A drummer forces us to go a certain way. You cannot ignore him. You have to acknowledge his percussive input. It forces a logjam in the corner. I mean, yeah, it's a nice place to be, but the freedom of a duo is missing. Matt and I are completely free in a duo setting. He's been with me for over 20 years in all kinds of configurations. The duo, though, excites me most. You can go anywhere. The only proviso is to listen to the other. But the sky is the limit otherwise. There's no third wheel to have to deal with.

Blogarrhea: I dig the trio more. It's compact with shorter compositions that are more like songs. I think I can even whistle to it.

IP: [laughs] That's the way it came out, yes. He forced us to make "songs" instead of constant rambling chords going around and around. 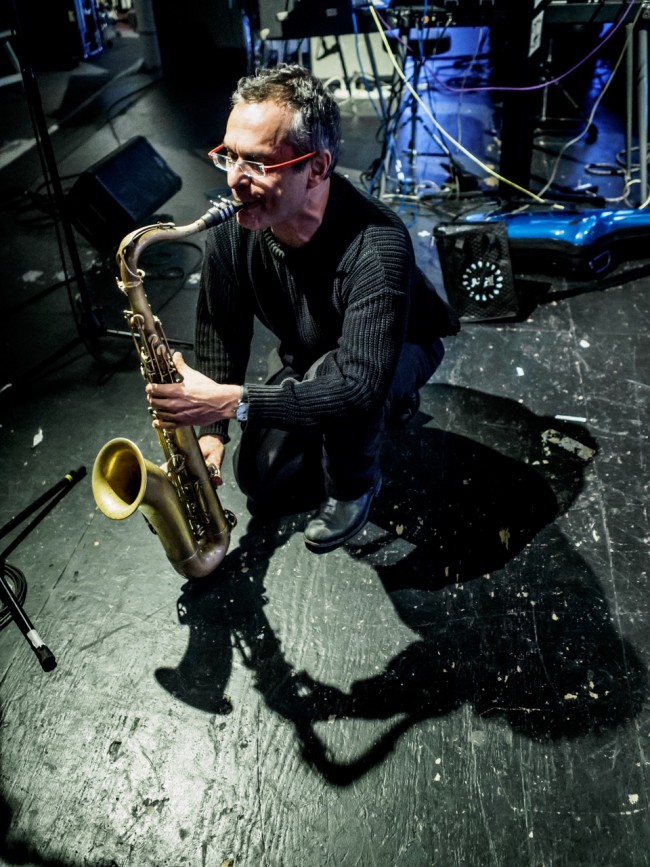 (Photo : Peter Gannushkin)
Ivo Perelman can see the sound coming out of his sax.

Blogarrhea: The third new CD, Villa-Lobos Suite, I may have to listen to a few more times before its obvious charm makes it way to me, maybe because it veers more classical than jazz.

IP: This one is a string session plus sax. I can mimic the subtle sound of the two violas. When I used to play the cello as a teenager, I loved it. So here, I oscillate between the low cello parts on sax and it works well with the higher viola sound for a trio recording.

IP: There's a lot of information there what with the three-part counterpoint. I think if you keep at it, you will be amply rewarded because what we have accomplished is really beautiful. It is dedicated to Brazilian composer Heitor Villa-Lobos who wrote music that I once studied hard and intensely all throughout my formative years in Brazil. Yet these compositions were all spontaneously composed at the moment they were recorded in the studio. Too bad you cannot come to Brazil for my exhibit of paintings.

Blogarrhea: Fine! Send me a round-trip first-class plane ticket, put me up at the finest hotel, and I'd be honored to head to South America.

IP: I would so do that if I could. We would have the pleasure of meeting each other, dining and talking more in-depth. You seem to understand my music-no small feat-which, in and of itself, is very rewarding for me as an artist.