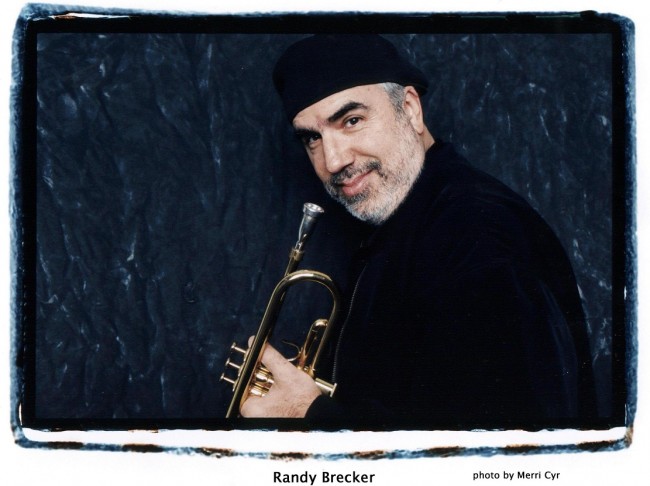 With the release of RandyPop! on Piloo Records, Randy Brecker, age 70, has come full circle. Back in the day, prior to and during an age when he and his Brecker Brother Michael [1949-2007] racked up hit albums on their own, Brecker was the go-to studio guy for, well, everyone. So now, as arranged by Kenny Werner, the famed trumpeter looks back by tackling some of those same songs, only this time with an impressive line-up of drummer Nate Smith, bassist John Patitucci, guitarist Adam Rogers, daughter Amanda Brecker on vocals, saxophonist David Sanchez filling the role his late brother played and arranger Werner chipping in on piano and keyboards.

RandyPop! leads off with Donald Fagen's "New Frontier." A notorious nitpicker and hard-edged curmudgeon, the Steely Dan leader had Brecker originally blow on this track for his 1982 solo debut, The Nightfly. Getting Brecker to dig up the dirt on such an iconoclast is practically impossible though. "Very exacting," is all he would say on his former boss, "but he knew what he wanted, and wanted to make sure he got it, even if it took hours and hours of re-takes...but those were great records."

Bette Midler's "Let Me Just Follow Behind," off her 1976 Songs For The New Depression is a soulful plea that precedes "I Can't Quit Her," Al Kooper's gem from when Brecker was in Blood, Sweat & Tears. He left that original octet to go join pianist Horace Silver. Of course, as fate would have it, with the addition of singer David Clayton-Thomas, BS&T would go on to become a platinum-selling superstar group. "I wanted to improvise more," explains Brecker, "as opposed to just playing in a horn section. Being offered the trumpet chair with the Horace Silver Quintet was a dream gig. Billy Cobham, Bennie Maupin, and John B. Williams rounded out that band!"

He was also there for Todd Rundgren's "Hello It's Me" and Garland Jeffrey's "Ghost Writer." Both songs have impeccable new charts with oomph, pizzazz and, in the case of the former, that beautiful melody first articulated by his breathy trumpet, oh-so-close to a human voice. James Brown's "Think!" and "I Got A Bag Of My Own" bring back great memories. As Brecker remembers, being in the studio with "The Hardest Working Man In Show Business" was a total trip and, no, Brecker was not the target of Brown's infamous wrath. All he had to say was that Brown was "the Master of the Groove...he was the Groove!"

Bruce Springsteen's "Meeting Across The River" and Paul Simon's "Late In The Eveing" round out the proceedings. "Simon was very thoughtful," he remembers, "and spent a lot of time pondering his next move or idea...I think of him like a sculptor slowly shaping the contour of his musical vision."

When Randy thinks of his late brother, he thinks of the legacy Michael left. A long pause ensues before he even answers. "Well, I think among saxophonists and musicians he's known and appreciated as the most influential sax man after [John] Coltrane. I wholeheartedly agree with that and more. He was on that level.  He was also an inspiration as a man confronting and overcoming substance abuse. As a brother, he was someone I could look up to, even though he was three years younger."

When asked about his own influences, Brecker is direct. "Everything in life that I came in contact with has influenced me. Philadelphia was a melting pot of different styles of music, so all the jazz cats I heard locally and in the clubs, had a profound effect upon my playing, as did the Philadelphia Orchestra and even the TV show American Bandstand which originated in Philly. Then there's the myriad of blues bands, R'n'B band, the great Hammond B-3 Philly organ trios and a whole bunch of trumpet players like Miles Davis, Chet Baker, Clifford Brown, Lee Morgan, Freddie Hubbard, Thad Jones, I could go on and on. It was cumulative."

He claims no one career highlight, "but," he ponders, "I suppose those years when I was doing a lot of session work, and then the Brecker Brothers Band hit on top of that, and sold a lot more records than we had anticipated in our wildest dreams, would be it. On that first Brecker Brothers Band recording, everyone played great and the whole thing went exactly as planned in every respect. It was wonderful to hear my first conceptual album-on which I wrote/arranged and produced-go down with such ease. The dedication of the musicians left an impression on me that I'll never forget. Also my last couple of CDs recorded live, especially, RandyPOP! Celebrating those years with new 'de-rangements' by Kenny Werner on some 'hit' records I played on during that era....really cool project."

Least favorite session? "There were many, let's say 'run of the mill' sessions so I can't name just one. Most went in one ear and out the other, especially when so-called jazz-rock fusion hit big, and everyone jumped on the bandwagon. The only memorable sessions were the ones where you got to work directly with the artist and share in the artist's conception. Most daily session work had you playing someone's arrangements, and the artists weren't even there, so as good as some of the arrangers and arrangements were, it was just an 'in and out' situation. They were called 'sweetening sessions.'"

Future plans? "To continue playing, writing and working. Recording less, saving it for special occasions since there is very little payback these days, and a lot of work and time goes into putting these projects together...I'm old-school which, today, means I like to get paid for my work!"

Paul Simon Will Not Have To Pay Man Who Ripped Him Off: Other Celeb Victims Include Uma Thurman, Natalie Portman, Martin Scorsese and Wesley Snipes