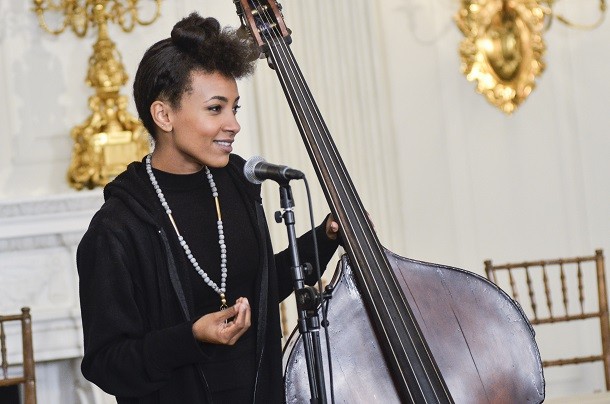 Esperanza Spalding speaks during the 'A Celebration Of Song: In Performance At The White House Student Workshop' event at the White House on October 14, 2015 in Washington, DC. (Photo : Kris Connor/Getty Images)

The lineup for the David Bowie tribute concerts at Carnegie Hall and Radio City are continually expanding. With the premieres set for March 31 and April 1, the evening will also feature none other than the heinously talented bass player, Esperanza Spalding.

Spalding's name was announced on Billboard along with J Mascis, Patti Smith, TV on the Radio's Kyp Malone, Gogol Bordello's Eugene Hutz, Kronos Quartet, Bilal and Tariq. The lineup, though, is already stacked with immense talents like Blondie, Laurie Anderson, The Roots and the Flaming Lips.

Unfortunately, if you haven't procured tickets to the event, you'll be disappointed to know they've all sold. But it's been announced that the Radio City date will be live streamed as a donation to the event's charity partners.

Ms. Spalding is the 2011 Grammy winner for Best New Artist. In the category, she beat out the likes of Justin Bieber and Drake for the coveted statue. Her speech praised the talents of her competitors--though it sounds like she doesn't consider fellow musicians "competitors" in any regard.

Nonetheless, the Grammy winner has an eloquence that makes her a charm to listen to. Perhaps that's why NPR's Wait Wait...Don't Tell Me! segment featured the singer-songwriter talking about her influences and aspirations. She was also beseeched to play a game in which the Spalding fielded questions about base jumping, baseball and Sweden's own Ace of Bass.

Peter Sagal, host of the series, also asked for some insight as to what inspired her to begin her musical journey-and on the bass:

"SAGAL: But the various stories of how you came to music - I read one that you were inspired by Yo-Yo Ma on "Mr. Rogers?"

"SPALDING: Yeah, yeah. And wildly enough, later I saw a tape of that episode. And when he goes to make the leave land (ph) - the two women characters are playing an upright bass, and the other one is dressed as an upright bass. So I think it was, like, some subconscious hypnotism that happened when I was 5."

While you wait on the gala, get down with a little Esperanza below.