Lin-Manuel Miranda and 'Hamilton' Yields Nearly $105,000 in Royalties Per Week 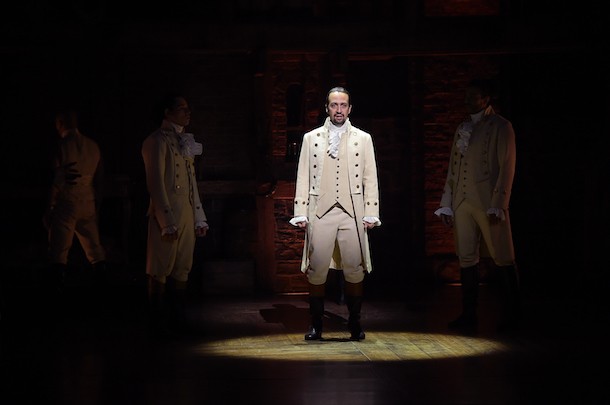 Lin-Manuel Miranda and his musical 'Hamilton' have set records for the box office but is Miranda's $105,000 a week royalty profit causing a rift among staffers working on the production? (Photo : Theo Wargo/Getty Images)

A Broadway phenomenon that's propelled its creator, Lin-Manuel Miranda, to icon status, it's been reported that the production of Hamilton rakes in nearly $105,000 a week in royalties.

The Broadway musical that combines hip-hop and history to tell the story of founding father, Alexander Hamilton, has broken box office records with tickets fetching as much as $549. Patrons have resorted to buying tickets off the market and have been scammed out of thousands.

Within weeks of its debut on the row, the show's backers have received nearly 25% of their initial investment, marking it one of the fastest returns in Broadway history. Kinky Boots producer Ken Davenport told the Hamilton-founded paper, the New York Post, "Rumors are already hitting the street that the show has fully recouped."

According to another report, the show yielded roughly $61.7 million by that start of April. If ticket prices are factored into the sum, the estimate reaches nearly $82 million.

Yet another report filed that the money is distributed to maintain overhead, naturally, but Mr. Miranda, who has a modest 7% stake in the show, profits nearly $105,000 a week in royalties. However, the biography that the show is based on, written by Ron Chernow, also has to dish out royalties to the author, which come from Miranda's pocket.

Miranda also is paid out salary for his role as the show's star, Mr. Alexander Hamilton.

"We live in a real world, and in that world, people are allowed to raise their hands and say, 'May I please have more?' And I don't blame them. I would, too.

"They are the ones bringing this show to life. It was a powerful argument they made; it was gut-­wrenching for me, and I took it seriously."

The show is poised to go on tour, with the production opening in Chicago later this year. A national tour will kickoff in San Francisco next year.

If you haven't yet, get a feel for the show with a preview below.