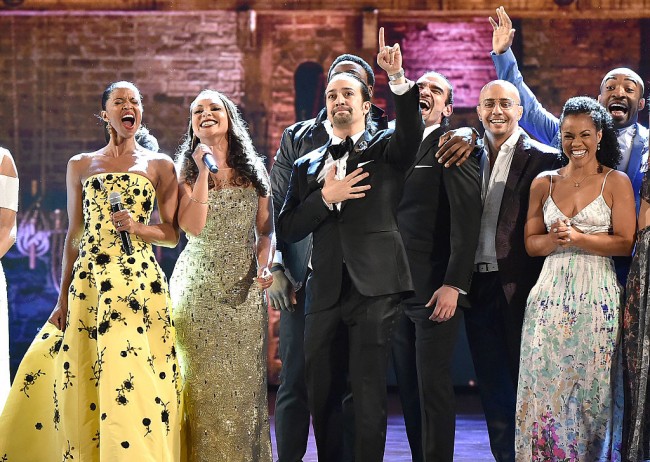 The cast of 'Hamilton' performs onstage during the 70th Annual Tony Awards at The Beacon Theatre on June 12, 2016 in New York City. (Photo : Theo Wargo/Getty Images for Tony Awards Productions)

Following the departure of show creator and star, Lin Manuel-Miranda, tickets to see Hamilton have dropped significantly, with prices on the resale market clocking in at an average of just $1,372. Although the number seems daunting, it reflects a 44.8 percent decrease since June, when tickets were averaging a whopping $2,488. For most shows scheduled in the next few months, the cheapest ticket available for each performance ranges from $300-$500. By comparison, the cheapest tickets for shows earlier in 2016 typically started at $900 or more, according to ticket aggregator TiqIQ.

Ticket prices for Hamilton hit new heights in June and July when Miranda announced that he, along with cast-mates Daveed Diggs, Phillipa Soo and the Tony winner, Leslie Odom Jr., would be leaving the production. Miranda's final performance with the cast averaged over $4,000, with the cheapest ticket priced at an insanely expensive $2,000.

Since its debut in August 2015, Broadway's hit sensation Hamilton has redefined the way fans buy tickets on The Great White Way. The production is sold out until May 2017 and has effortlessly become the most expensive show the resale market has ever seen.

Most recently, Miranda has joined forces with Sen. Charles Schumer (D-NY) to spearhead a national effort to outlaw "ticket bots." These bots are computer programs that buy up the best seats to events within moments of their going on sale, allowing them to be resold for significantly higher prices. New York State criminalized use of the programs two months ago. The hugely pricey tickets to Hamilton have no doubt limited those able to see the production, something the show has been criticised for in the past.